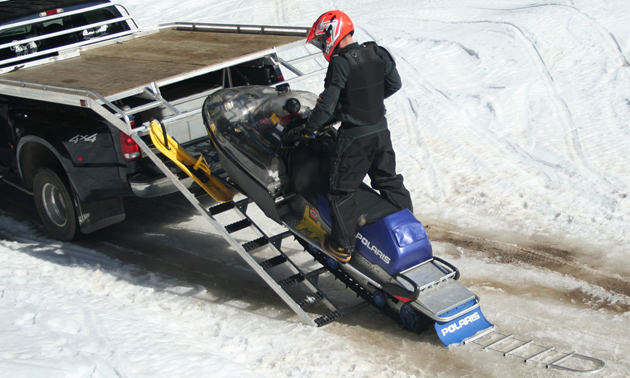 Sure Load resembles an aluminum pool ladder and it hooks up in front of your snowmobile ramp to give you instant traction. photo courtesy Scott Fischer

To load or not to load—that is the question. Many of us have some interesting stories of loading snowmobiles gone wrong.

I’ve heard many horror stories. My buddy, Andrea, for example, ended up in the cab of her husband’s truck.

Another good friend of mine, who was new to loading his snowmobile, was on a ramp that was too short for the lifted stud-mobile it was going on. He ended up flying off the side of the truck, banged up and bruised, with $1,200 of damage done to his machine. It is a common occurrence.

Here are some of my own blunders:

Loading a snowmobile onto a tilt deck with a slight incline: The surface in front of the ramp was icy, so upon the first attempt, the snowmobile simply spun in front of the ramp, kicking the tunnel over to the side. My second attempt was the same story. I needed more oomph to get onto the ramp, which, upon the weight of the sled, tilts back to the horizontal position. So I goosed it and I noticed I was sliding, but my skis were on the ramp this time. With a false sense of security, I started up the ramp, but then disaster hit. My track caught traction and guess what? Yup, super Trish went over the ramp, crashing into the tailgate of the truck.

Loading with a modest ramp on a slightly uneven icy surface: So I tried a couple of times to load the sled and each time I hit an ice bump, which knocked me out of alignment, leaving me with no time to get it back together. The third time, I made it up the ramp, but not on the SuperGlides, causing my carbides to grab the rungs of the ramp. I was stuck—stuck on the ramp. I tried to move it and, oh, I succeeded—I moved the ramp out of place with my sled on top of it, only for them both to come crashing down on my foot. Yeah—good times.

Loading onto a steep ramp of a lifted truck:  My husband and I were riding with our buddy and we had our sleds on his truck. Our buddy was waiting for me to load, so I figured, I’ll give ’er a go. I made it but I kind of had too much oomph and almost ended up on the roof of his truck.  The look my husband gave me was nothing compared to the tongue lashing. “I don’t want you loading your own sled,” he said. Hmmm. That’s not an option for me. I want to load my sled, but I just need to do it better.

Insert my new best friend, the Sure Load. This device was invented by Scott Fischer and his friend Mitch Bollman. They had an experience that birthed the most handy loading tool I’ve ever seen.

After riding one wintry day, everyone was at the staging area attempting to load their machines. The ice in the parking lot was ruthless. People were falling onto the ice in their attempts to assist the snowmobiles up the loading ramps. It was an impossible situation. So Scott and Mitch created the Sure Load, which makes loading your snowmobile a breeze.

Sure Load resembles an aluminium pool ladder and it hooks up in front of your snowmobile ramp to give you instant traction. This minimizes the speed with which you need to approach the ramp and it lessens the amount of space needed to take a run at your ramp. Your track simply grabs onto the rungs of the Sure Load and you crawl up onto your deck, easy as pie. Seriously, it is that easy. My world has opened up and the anxiety I used to get before loading is gone now. Any surface is easy to load on.

Cement is another surface that caused sliding and washing out but with Sure Load, loading is now a piece of cake. It’s quick and easy every time. The women at the last Ladies Ride in Nelson, B.C., that we attended were beyond excited. You could see the wheels turning. Freedom! (yelled in my best Mel Gibson voice).

I can see the potential for commercial application of this product as well. Workers that are on job sites that require constant loading and unloading of snowmobiles have the extra assurance of a safe and easy load.

Scott Fischer and Mitch Bollman, well done! You have made life a heck of a lot easier.