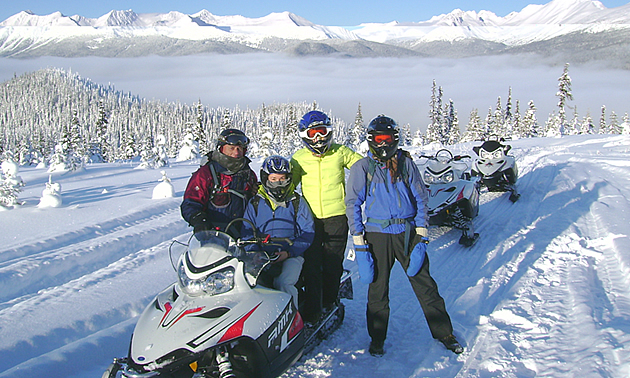 Most company perks do not the include free use of a snowmobile. For Dustin Harvey, however, they did. Harvey, who is originally from southeastern Ontario, started sledding when he worked as a guide for a snowmobile tour operation in Invermere, B.C.

“My first year at the snowmobile guiding place, I was just the trail maintenance guy and looked after the buildings and stuff,” said Harvey. “My boss let us take the mountain sleds out on our days off, so I basically learned how to sled on the job. It’s my favourite sport now.”

Two years ago, Harvey’s passion for the sport took him to Smithers, where he started his own snowmobile tour company called Harvey Mountain Adventures Ltd. He offers full- and half-day tours, sled rentals and guided multi-day trips into the backcountry; he can also arrange accommodations for his guests.

Harvey has spent many hours exploring different sledding areas around Smithers. Because of this, he can tailor his tours to take clients to the places best suited to their riding abilities; there is a tour for everyone from the beginner to the most experienced. So far, Harvey said, most of his clients have been newcomers to the sport.

“It’s nice to see that people want to give it a try—and everyone’s really liked it,” said Harvey.

Harvey has had guests from Vancouver, B.C., and Edmonton, Alberta, as well as several from Smithers and other towns in northern B.C. He will even be hosting a group from Switzerland next winter.

Harvey takes delight in sharing the joy of snowmobiling with others, and seeing them have fun.

“It’s definitely a perk to my job when people are full of smiles after the trip,” he said.

Harvey has five mountain machines in his fleet: three are 800 cc sleds and two are 600 cc. Harvey said that a few of his clients who have rented these sleds from him have done so because they were interested in taking up the sport and they wanted to see what it was like before they bought a snowmobile of their own. Harvey said that he offers some of the newer machines and that eventually, he wants to get a lineup of trail sleds as well.

Lots of snow to go around

Smithers is an ideal location for Harvey’s business and lifestyle. He said it has pretty much everything to offer in terms of sledding opportunities.

“If you don’t want to go on the mountainous terrain, we have Harold Price (riding area),” said Harvey. “It has nice, big meadows that are pretty much endless it seems. Another popular area is the Microwave; it’s about a 15-kilometre trail into a nice, wide open plateau.”

There’s a lot of alpine terrain around Smithers, but Harvey said he can easily take people on a five-hour tour without entering avalanche areas. This year, according to Harvey, Smithers is above average for its amount of snowfall.

Harvey got a good sampling of the snow in January when he and a few of his buddies went for a ride in the Sinclair area. The trail was groomed for about 10 kilometres, but they had to try to break trail to the alpine. After about three hours of getting stuck on account of the fresh powder, Harvey was able to get to the top with his new RMK Pro 800 sled.

“It was definitely a memorable trip,” he said. “We didn’t get much good riding in that day; there was so much snow it was crazy.”

Harvey said that even when it hasn’t snowed in a whole week, he can still find places to make fresh tracks around Smithers.

When Harvey isn’t sledding and taking tours this winter, he will be working on expanding his company. He’s also trying to organize a snowmobile competition at the ski hill in Smithers. If his plans come to fruition, the event will probably take place after the ski hill closes in late April.

Last winter, Dustin Harvey of Harvey Mountain Adventures Ltd. was hired as a snowmobile operator when portions of The Grey—a survival thriller movie starring actor Liam Neeson—was filmed in Smithers. According to Harvey, the filming of the movie, which was released on January 27, 2012, took place in an alpine area at the ski hill in Smithers. Harvey said it was a cool experience for him to be involved in this production.