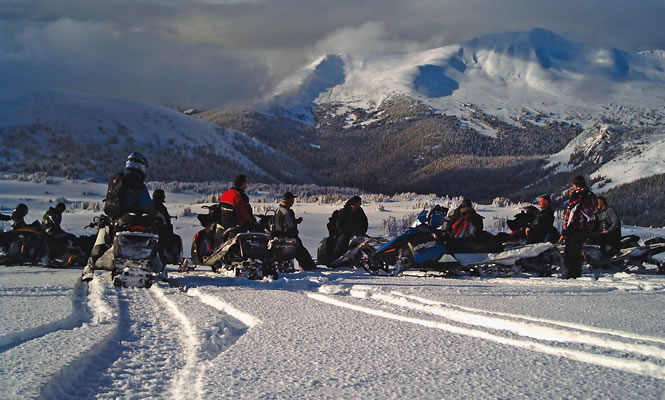 Sights like this are one in a million—it’s no wonder sledders love the outdoor opportunities around Smithers. Trish Oosterhoff photo

Whether you’ve been making trails for years or you’re looking for some gentle slopes to take young sledders, Smithers has something for all experience levels—just ask Trish Oosterhoff. She is the representative for the Smithers Snowmobile Association and rides with her 22-year-old son, Adrian.

“When he was a little kid he used to rip around the yard, and then we started taking him up the hills,” she said. “He and I ride together in a fairly large group.”

Oosterhoff began snowmobiling when she joined the association 16 years ago. Her current ride is a 2007 Ski-Doo 800 Rev. As a seasoned sledder, she heads for the steep and deep, but she also recommended some family-friendly zones.

“The Dome is the family area around here,” said Oosterhoff. “The Microwave is as well, but it’s The Dome that is definitely geared towards families. It has rolling hills, open meadows and well-defined trails. The groomer can go down the entire trail, so it’s fairly wide—and you don’t have to worry about hitting trees on the trail.”

Smithers is a fantastic place to enjoy the great outdoors. Oosterhoff said getting out into the mountains is a big part of snowmobiling’s appeal.

“We have excellent sledding,” she said. “It’s very versatile, right from the beginner up to the extreme rider. We don’t get a lot of outside traffic, so we do a lot of powder riding.”