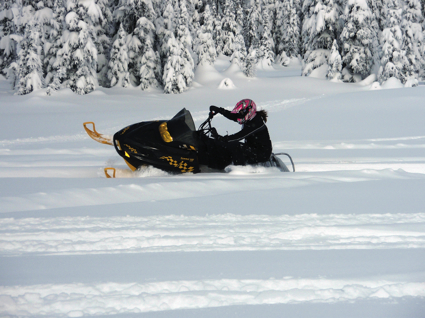 Stephanie Chad slices through the powder with the greatest of ease while riding in the Smithers region. Photo courtesy Stephanie Chad

Smithers has unbeatable snow, mountain ranges that tower high above the trees and spectacular scenery that dazzles the eye. Sledders abound in this region because of the natural mountainous terrain. Popular areas include the Big Onion in Babine Mountain Provincial Park, the Dome to the east of Smithers and the Microwave.

Watch out for the pink helmet

Stephanie Chad knows all about how great the sledding is around Smithers. She was raised in the area and her father always made sure that she had some sort of sled to ride. When Chad was five, her father bought a Kitty-Kat for her.

“Dad always had some sort of machine for us to ride,” said Chad. “Then I met my husband, who is also into sledding.”

Now Chad and her husband, Carl, go riding quite often. Their favourite snowmobiling areas are in Houston, which is about 50 minutes south of Smithers, and locally, the Chads especially enjoy sledding in the Dome.

“It is kind of a mixture of everything,” said Chad. “It has easy riding for those who are beginners and if you go up with people who haven’t gone out before. But it also has the hills that the boys like and lots of places to play. If there is fresh powder there are lots of places to play around and we can spend all day up there—it is awesome.”

Just last season, Chad said that she had her most memorable riding day ever.

“The last day of the year last season (was one of my best rides),” said Chad. “It was in mid-March and we found this meadow that had been untouched all year, which is rare for the end of the year. It was sunny all day and it was the longest and best day of snowmobiling—this meadow was totally hidden and it was great.”

A great chance to bond

Stephanie Chad said that over the years she has noticed that a lot more women are getting into sledding. One reason is because these women all have boyfriends or husbands who will give them their old sleds when they upgrade. Once they try it, the women realize that snowmobiling is a lot of fun. Plus, Chad said manufacturers are coming out with pink equipment, which she thinks has something to do with more women becoming involved.

“I think it is a great bonding experience with your mate if they are into snowmobiling as well,” said Chad. “Or you could just go with a group of girlfriends. And it is good exercise, and that always appeals to women.”

Getting the hang of it

Faye Johnston did not grow up on a sled but her husband, Scott, did. Once they got married and moved to Smithers, Johnston said that she has really started to get into sledding because the region has areas that are fun for both her and Scott.

“A lot of the times I wasn’t going out with my husband because the hills were too hard for me,” said Johnston. “But once we moved to Smithers we got two sleds and where we go is really great for both of us. There are open fields where I can play and do my own thing and Scott does the mountain climbing. Coming to Smithers has changed (the way we snowmobile) and now we go out a lot together. There are so many places that we can go where we both have fun.”

Johnston said that she and Scott usually go to the Dome or the Onion to sled and that her favourite day of riding was on Valentine’s Day last year.

“We went out to the Dome and it was just Scott and I,” said Johnston. “We came to a spot where it was fields and fields of untouched powder. When I fell off (my sled) I flew into the powder. The sky was so blue and you almost got a suntan out there. It was just the feeling of making your own tracks—it was really fun—but most days out there are like that.”