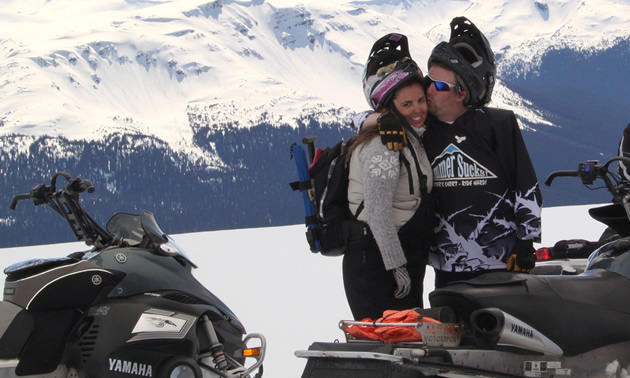 Jason Martinson started sledding in 2002 after he hitched a ride at a hillclimb in Terrace, B.C., and realized what he’d been missing.

“I was just in the right place at the right time,” said Martinson, who was living in Haida Gwaii (formerly the Queen Charlotte Islands) at the time. “I actually ended up relocating to Smithers just so I could go snowmobiling.”

Martinson, who travels for work, was living in Kamloops in the B.C. interior four years ago when he met Stacey Lampreau and offered to take her for a ride during a tobogganing and snowmobiling get-together with friends.

“She loved it,” said Martinson. “She’s an avid backcountry skier and snowboarder, so she’s spent a lot of time in the mountains.”

The pair took a trip to the Crowfoot in the Shuswap shortly afterwards, and Lampreau has never looked back.

“She was a quick learner,” said Martinson. “She’s spent enough time in the mountains to know her way around; it was just that now she was having as much fun going up as she did coming down.”

Gaining confidence and a thirst for more

Although Martinson said Lampreau tackled the sport with a vengeance, Lampreau said it wasn’t that simple.

“At first I was reluctant because I was a firm believer that you’re supposed to earn your turns,” said Lampreau. “It was very scary at first. Then my adrenalin kicked in and I wanted more.”

After the trip to the Shuswap, Lampreau was hooked and completely finished with riding double.

“I wanted my own (sled),” she said, and in the fall of that year, Martinson granted her wish.

“Needless to say, I'm not climbing up mountains on my snowshoes to snowboard back down,” said Lampreau. “Now I have a rack on my sled to carry my snowboard for when I get the urge—and to be honest, that seldom happens.”

Despite her enthusiasm, it took about two years for Lampreau to feel completely confident on a machine. She said the most difficult part was learning to trust the power of it.

“I learned after many times being stuck that staying on your throttle is the best help you can give yourself,” she said.

When you really love the rush

Martinson said when it comes to introducing the sport to others, the challenge is twofold.

“You have to convince people to get up on the mountain,” he said. “But once they get there they fall in love, and the vast majority turn up the following year with their own sleds. The hard part is convincing them to dish out the money to buy their own sled. It’s a big commitment and you really have to love it to justify spending the money.”

Coaching a beginner is all about location, said Martinson.

“Try to get started in an easy place with meadows or small hills until the person gets a feel for the machine,” he said. “Then let them progress at their own pace. Some people are naturals and you can drop them off a big face right away, and some are terrified and you have to keep them on the flat for a while.”

Lampreau suggests putting a beginner on a machine with as much or more power than your own.

“Otherwise, you will spend most of your time helping them get unstuck,” she said. “Also, know the terrain you are taking them to, so you show confidence in your ability as a tour guide.”

Martinson recommends The Onion in Smithers as a great place to get started, because it has terrain for everyone from beginner to extreme riders.

It doesn't get any better than this

Martinson and Lampreau both love the freedom of the sport, being in the backcountry and taking in the breathtaking views high up on a mountain as the sun is setting. Martinson said he loves the chance to play in places you'd never get to without a snowmobile.

“On a spring day you can ride as far back on the mountain as you want. You aren’t restricted by lines on a road—if you want to hit something, just hit it. Nothing holds you back—except gravity,” he laughed. "That can bite you."