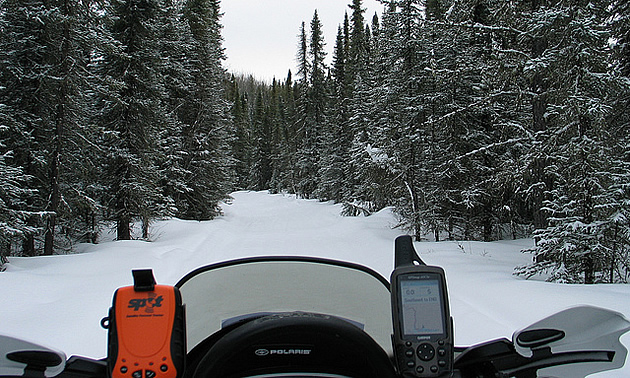 Schell had a chance to spend some time alone in this gorgeous area. Trevor Schell photo

For Saskatoon snowmobiler Trevor Schell, snowmobiling is more than just a hobby—it’s an activity that allows him to head out on his own and get away from the hectic pace of the city.

“I work in retail,” said Schell, “so I’m around people all the time. Snowmobiling allows me to be by myself.”

A member of the Saskatchewan Snowmobiling Association, Schell spends most of his time sledding in Saskatchewan’s Zone 2, in the Esker Bear Trail system North of Prince Albert. With his parents now retired and living year round near Little Bear Lake, visiting the area gives Schell the opportunity to reconnect with his parents, who introduced him to snowmobiling just three short years ago.

“It’s the solitude and the adventure I love,” he said.  “Every time I go it seems like I see something new that I’ve never seen before.”

His Polaris Dragon is not only best suited to riding the kinds of trails he loves, but also allows him a little off-trail fun. Schell also finds that the machine’s slightly longer tunnel gives him the space to carry the supplies he needs to remain safe when travelling alone. From a standard GPS, to extra fuel, Schell says he also straps a fire log to his sled in case he ever found himself cold and stranded. He also carries with him a SPOT Satellite Personal Tracker.

“Because I often travel in areas where there is no cell phone coverage,” he said. “I bought the tracker to allow my wife or parents to be able to monitor where I am throughout the day, and to be able to see where exactly I am, and that I’m still moving.”

A device that uploads his location to his Google Maps account every 10 minutes, it also allows him to hit an emergency help button that ensures aid is sent to his exact location. With his safety well taken care of, Schell can then focus on enjoying the peaceful solitude as he explores the trails. Trails he never seems to tire of.

“What’s great about them is that they’re a a combination of thick forest, really twisty trails and some long stretches,” said Schell. “They’ve got a little bit of everything.”

An avid photographer, Schell stops often to take pictures along the way, some which have graced the pages of the Saskatchewan Snowmobiling Association’s webpage, including one that won a 2010 contest for the Association’s home page. Whether it’s wildlife or scenery, there are plenty of sights along the way to see and snap.

“I’ve seen a moose, a lynx and lots of rabbits and other wildlife on the trail,” said Schell, “and with lots of little lakes around the trails there, it’s a really beautiful setting, especially when the trees are covered with snow and frost. I’ve been there in -35 and I’ve been there when it’s been around zero—it’s spectacular no matter what the temperature.”

With no one’s speed to match but his own, Schell says he loves that he can leisurely explore the area, take photos when it suits him, and stop at some of the many little stores, resorts and shelters that dot the trail throughout. A solo adventure usually sees him out for eight to 10 hours, travelling anywhere from 200 to 300 kilometres in a single day.

By far the best memory he has of the trails is the time he came upon a groomer coming from the direction he was headed.  Pulling over to let him pass, Schell saw that ahead lay the opportunity of a lifetime—nearly 100 kilometres of pure, perfectly smooth, untouched snow.

“It was a really neat experience,” he said. “There I was, driving on these freshly groomed trails that felt like they were made just for me. That was a great feeling, but really every trip is my best one. They’re all exciting, yet peaceful adventures.”

Trail maps, top snowmobile trails, club contacts and other useful information you can use before planning a snowmobile trip to Saskatoon, SK