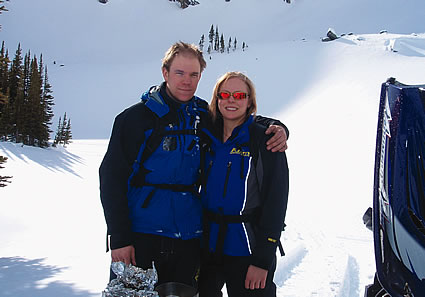 Jessica Shaw has the dedicated support of her husband, Brandon. Randy Brayden photo

For Jessica Shaw of Prince George, the passion for snowmobiling started early. When she was a baby her parents would ride double with her, and she began riding her own machine at the age of eight. Now 23 years old, Shaw has grown up to be one of those women who defies the stereotypes.

“Women can keep up and can go where (men) go,” she said, “sometimes even more places because we are lighter and our machines can take us to that high mark. My husband is an aggressive rider who is super supportive of me riding and takes me anywhere he goes.”

Let the girls play, too

Shaw believes it is important for female riders to take a hands-on approach. She encourages ladies to hit the trails themselves, instead of staying behind while their husbands have all the adventures.

“You don’t learn to ride that way,” she said. “Men had to start somewhere too. Sure you might get stuck lots, but that’s part of the fun.”

With an increasing number of women in the sport, Shaw has noticed that the female presence is becoming more recognized.

“Women and snowmobiling have come a long way in the past 10 years and there are some incredible women riders out there,” said Shaw. “We are now featured in magazines and on DVDs. We even have gear designed with women in mind and there are more of us competing in various events around the world.”

Shaw has found that the Prince George community, and dealerships such as Prince George Yamaha, have been instrumental in supporting sledders of both genders and sponsoring club events.