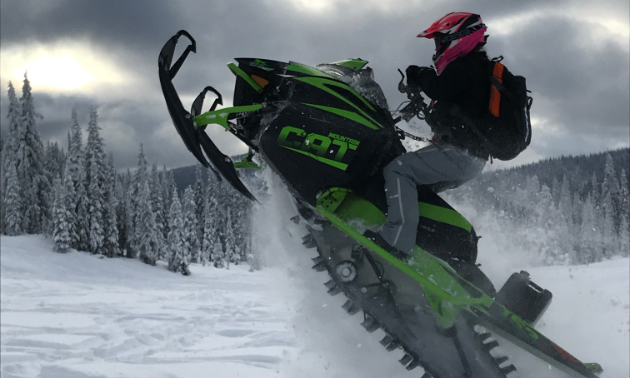 Meghan Bosecker is as hardcore as it gets in the realm of snowmobiling. No, she might not pull off the death-defying tricks that captivate and dissipate in a matter of seconds. Bosecker approaches sledding with a dedicated tenacity for cultivating the sport into its utmost potential.

Her level of commitment hasn’t gone unnoticed, either. Bosecker, president of the Prince George Snowmobile Club, has been recognized for her years of contribution by being crowned the Outstanding Snowmobiler of the Year award at the 2019 British Columbia Snowmobile Federation Excellence Awards. As it turns out, the award was given at a time Bosecker needed it most.

“I was pretty overwhelmed, as the awards ceremony was three days prior to me officially being diagnosed with multiple sclerosis,” she said. “I was in the midst of my first MS flare up and was terrified of what my future would hold. I’m still unsure of what the future holds for me, but I now know that it still includes snowmobiling. I never would have imagined that this year I would be the recipient of such a prestigious honour. I was a mess at the time but a very happy, grateful and incredibly honoured mess.”

Bosecker has certainly earned the honour for her years of hard work and passion within the sport.

“I’ve been obsessed with snowmobiling for most of my life,” she said. “Every school project, every essay, every presentation that I could link back to sledding through high school and into college, I did.” 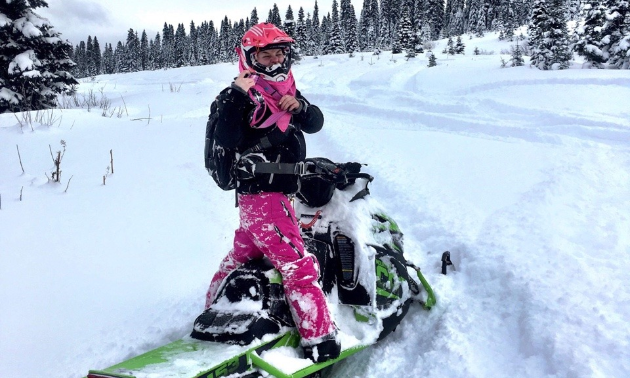 Bosecker has been involved with snowmobile clubs and attended meetings on and off for the past 15 years. Over the past six years, she ramped up her devotion to the Prince George Snowmobile Club, spending two years as the marketing director and the past four years as the club president. Bosecker also attends BCSF meetings and sits on a few committees within the organization.

“I think I won the award because I have a vision for snowmobiling in British Columbia,” Bosecker said. “I want to see it grow and I want to share this amazing, crazy sport with as many people as I can because it has made my life so much better in so many ways.”

When it comes to being labelled “Outstanding,” Bosecker doesn’t quite see herself fit that mould.

“Does getting stuck downhill count as a skill?” she said with a laugh. “The one skill I have honed over the years is my commitment to the ride. From the moment that sled is fired up in the morning to when we load up and head home at the end of the day, I’ve learned to appreciate every single moment of it.” 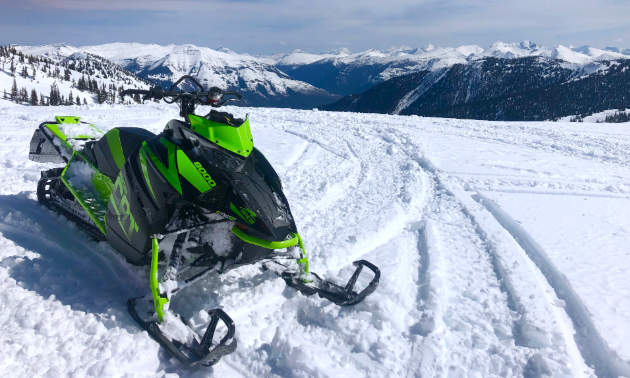 That level of faithfulness to snowmobiling for the past 20 years has led to some epic misadventures.

“There have been some brutal days—days where we have had to break the back window of the truck because we locked the keys in it after riding through the night at -30,” said Bosecker. “I missed my mother’s birthday party only to arrive home freezing cold and with a face covered in frostbite. There have been days when my sled has blown up two kilometres into the ride, so I doubled in but then everything else went wrong and the ride out included six people on two running sleds (two driving, two doubling and two being towed). There have been trail clearing trips through -25 [C] that every single chainsaw froze up, then my steering froze solid. Trail riding without the ability to turn was interesting.

“Even so, each and every ride is worth it to me. Each ride is its own adventure. The reward is always worth the risk. I wouldn’t trade one moment of any single chaotic sledding trip because I love each and every part of this sport.”

As you may have figured out by this point, Bosecker is quite the character. She’s even given her snowmobile, a 2018 Arctic Cat M8000 Mountain Cat 153”, a name: Kermit.

“It’s the best sled I’ve ever ridden,” she said.

With Kermit, Bosecker is able to experience the freedom to explore Prince George’s extensive riding areas.

“Sledding is freedom from the mundane, from the noise of society, from all of life’s demands,” said Bosecker. “I love those bluebird days with the deep, untouched powder and just floating through the snow in the sunshine in the middle of nowhere. It’s like we get to go into another dimension that the rest of society has no idea exists.”

One of the interdimensional locations Bosecker prefers to ride is Torpy, located an hour east of Prince George in the McGregor Mountain Range.

“I love the challenge of it and the insane views,” she said. “The main access point to the alpine is through a steep ‘burn’ that can be interesting, depending on conditions. Once you get up there, it’s like a giant playground of creek drainages and big bowls. You can play in wide open meadows, pull big chutes, or you can get right into the trees and find some insane technical stuff. All kinds of terrain. Plus, there is a beautiful safety shelter where we hold family rides with the club. It’s great to warm up and have lunch.”

In keeping with Bosecker’s peachy personality, she’d rather highlight and recognize the unsung contributors to snowmobiling than take all of the Outstanding praise for herself:

“Thank you to the BCSF, all of their member clubs and all of the individual volunteers for working tirelessly behind the scenes to make all of the ‘magic’ happen across our province each winter,” she said. “It’s the groomer operators, the trail clearers, the cabin builders, the outhouse maintainers, the event and fundraiser co-ordinators, the treasurers, the website updaters, the ones who sit in endless meetings trying to get approval for grants and permits, the community members who show up and chip in, and so many more who are willing to step up and give back to their sport. They are all outstanding snowmobilers.”