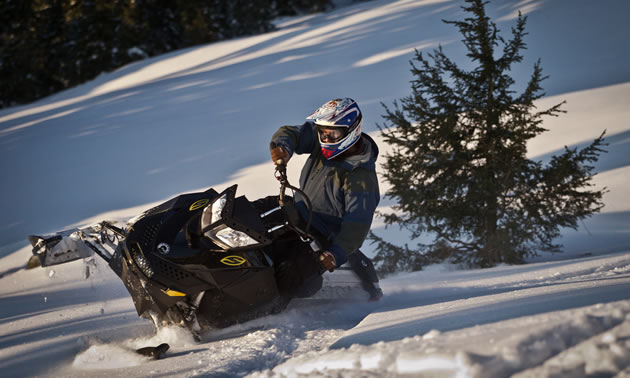 Matthew Mallory lays his sled over in the shallow snow during his first ride of the 2011/2012 sledding season. Craig Wilson photo

Thumb meets throttle and cables draw tighter, injecting a flow of oil and gas to mix with air and fill the cylinders as it is compressed into an explosion of excitement and thrill lurching the track forward.

Like the Lone Ranger I want to raise my arm in the air and wave my hat (if I were wearing one) shouting, “Hi-yo Silver, away,” as the machine rears its head and takes off in a shower of snow and gravel.

The first day of the season is one of those days that will ink itself permanently into that black hole we call our mind so it’s important that you make the most of it.

The past two years I have shared my first day of the season with a good buddy high up one of the local mountains here in Whistler, B.C. In the early days of November, we will look up and judge our first ride by how white the mountains appear from the valley—or in the case of a couple years ago when we were celebrating heavily at a sled movie premiere and in the wee hours of the morning decided that it was time to get out and burn some gas. Come hell or high water, on the appointed day, sleds will be loaded on trucks and snow will be sought out.

The drive, even though close, leaves us with lots of time to speculate on what we are getting into. How far will we have to four-by-four? Where will the rideable snow start? How much snow will there be at the top of the treeline? These are things I look forward to—it’s not just the actual sledding that makes the day spectacular but everything leading up to it. Building the excitement through a series of rituals in a sorta’, kinda’ way.

That first day of the year, “opening day,” is a ritual we all participate in and I am sure that most go through a similar process that involves watching sled movies weeks and months before you head up to the snow line, tuning the sled and sitting on it, senselessly revving the throttle enough that you have to hold on to the brake to keep from shooting across your garage—and of course making sure your pack is ready and waiting. All of these rituals will ensure that your senses are vibrating at a fever pitch when you awake on that fortuitous first day of the new season.

The first day of sledding

Two years ago, it was November 12, when my buddy, Craig, and I made the long trek into the mountains. Last year we bumped that date up to November 6. The snow was pretty thin but we could still ride. Considering that I grew up in Ontario and have only been out west for a quarter of my years, I can appreciate marginal conditions by rationalizing that we would have loved to have that much snow back east. So there, it was easy, the couple feet that were on the ground were more than shreddable and the thin skiff over the rocks just kept us on our toes demanding that we be quick, nimble and ever conscious of line choice.

Greeted by blue skies and slightly below-zero temperatures, it was an absolutely perfect day to be on a mountain. There were a few tracks from ambitious ski tourers but not a sled track was to be found. Having never been up in such little snow it was rather disorienting. We are accustomed to seeing everything from a minimum of five feet higher. Route finding was interesting but there is nothing like some demanding edge and throttle control on the first day of riding to warm you up. It took us around two hours to make it up, back, down, back up and around to the top of the treeline—a ride that is normally 15 minutes from the valley floor or about four or five minutes from where we had parked the truck when the snow is a little deeper—it seemed every hundred yards held a new challenge.

These are part and parcel for opening day—somewhat sketchy conditions, demanding riding, a few new scratches on the skis and cold beers with a good friend when the day is done. Tuckered out and no matter what the riding was like we are satisfied, having been waiting months to get in some saddle time on the snow machine. Just riding the road up feels good but getting even a few inches of snow, a couple turns and some fun climbing and sidehilling in, well, that is just spoiled really.

Come on November, bring it on!