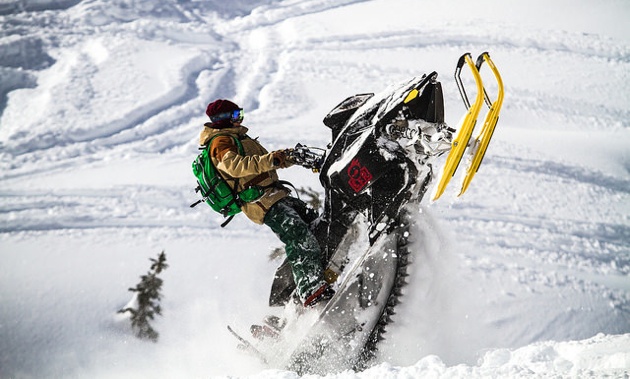 Bauer grew up on a farm outside of Acme, Alberta, and started snowboarding 14 years ago on whatever slope he could find.

“I was a desperate kid," Bauer said. "I once pushed up a landing with the tractor and snowboarded off the roof of our bale shed. The neighbours were stoked.”

His dad had an old 1970s Ski-Doo on the farm, but Bauer didn’t really start snowmobiling until five years ago—to access the backcountry after moving from Banff to Whistler. Bauer bought an old Yamaha Viper for $2000 during his first year in Whistler and blew it up on his third day out.

“That was unfortunate," he said. "I didn’t get to ride it much that year. The snowmobile is a harsh mistress."

Just like most people starting out snowmobiling in the backcountry, Bauer had a hard time his first days out. Not one to give in easily, he battled through the struggle and stuck with it. 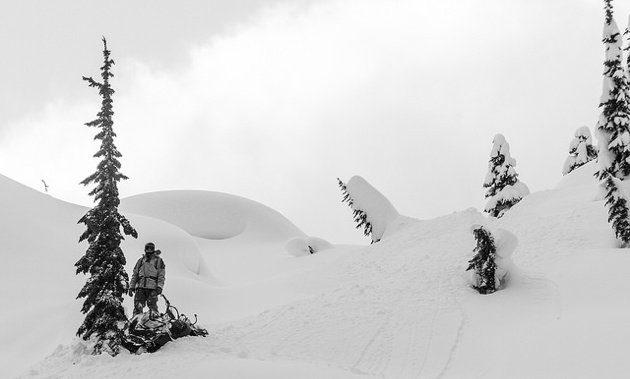 “Sledding is the kind of thing you do 100 per cent or don’t do at all,” he said. “Otherwise you are just getting stuck all the time.”

It’s important to have someone to show you the ropes when you're first starting out snowmobiling in the backcountry, and Bauer won the lottery in this category. 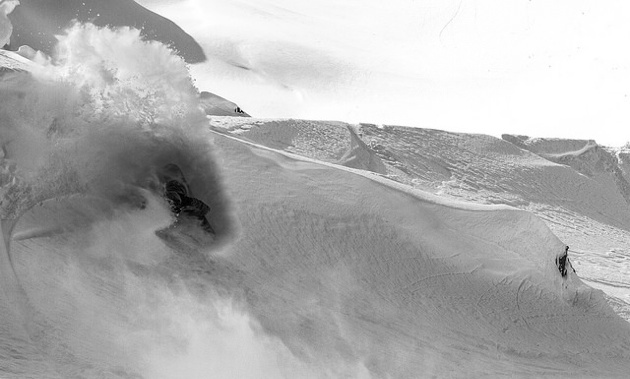 “I always tried to go out with these older guys from Pemberton, such as Dave Basterrechea, Dave Treadway, Joe Lax, Delaney Zayac and Chris Ankney," he said. "They are pioneers at sled accessed backcountry snowboarding and skiing."

Having such a solid crew to ride with in his early years didn’t stop Bauer from taking avalanche training, though. In fact, he really didn’t have a choice.

“I had this friend whose wife wouldn’t let me go out with him because I didn’t have my AST 1 course," he said. "I found the course was a good foundation and now I value going out with those who have a lot of experience and knowledge."

Proper training is important, but no amount of training will tame Mother Nature. Bauer has been fortunate enough to avoid any serious avalanches over the years and has only had a few close calls.

“I had this situation last year where I got raked over some rocks by my slough," he said. "I was being cocky, thinking I could cut under one of my turns before the snow caught me trying to get onto a spine. That didn’t pan out and I ruined a board."

Living in the Sea-to-Sky Corridor allows Bauer to access Whistler, Pemberton, and Squamish zones quite easily, but he chooses to stay around Pemberton most often.

“Pemberton is my favourite for sure," he said. "Whistler zones are convenient and well maintained, but nothing beats the feeling of being in the wilderness. Being so far away from everybody except for a few good pals in nature is the best.”

Bauer spends most of his days riding with his brother Josh Bauer and filmer/photographer Benjamin Webb, who happened to shoot the photos for this article. Bauer recently sold his Summit XP and plans on picking up an XM to continue his exploration of Western Canada mountain ranges, as snowmobiling continues to become an even more important part of the skiing and snowboarding world.

“Well, essentially with sled boarding you want replace a chairlift with a sled, but then you need someone to drive that chairlift back downhill. The ghost ride rarely works. In fact, I even smashed in my bumper trying to ghost ride my sled. it didn’t stop where I wanted it to. Mastering the double up is key, side by side on the running boards, with one hand on a grip and the other on the handlebar strap." -Jake Bauer