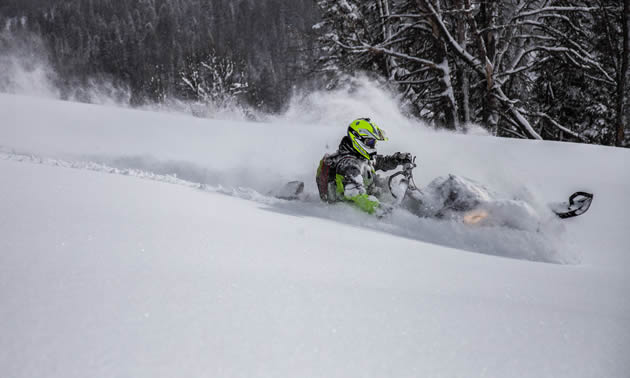 Dave Norona got into sledding in 2005 and now he's an ambassador for Ski-Doo. Alex Hendy photo

Dave Norona from North Vancouver, B.C., speaks enthusiastically about everything in life, but get him talking about sledding and his mouth will move a mile a minute. He’s passionate all right, and it’s infectious.

In fact, I can remember the first time I spoke to him. It was about the new Summit Freeride, and when our conversation was over, I felt the sudden urge to ditch work, load up my sled and go riding.

Unlike myself and many other riders out there, Norona didn’t have a textbook introduction to snowmobiling. He never grew up around sleds and he doesn’t have any memories of sitting around a campfire in the winter, roasting hotdogs with his family. In fact, he was more of an indoor kid, but that all changed when his parents bought him ski lessons at North Vancouver's Grouse Mountain Resort.

“I actually wanted a ghetto blaster,” said Norona, “but I got this piece of paper and I was kind of bummed.”

Once he tried skiing, though, Norona was hooked. Then he discovered mountain biking, running, swimming and virtually every human-powered sport out there. After high school, Norona spent the next 16 years of his life travelling the globe, competing in more than 400 adventure races, placing first in many of his events.

Eventually, Norona grew tired of the competitive side of things, so at age 34, he decided it was time to retire from the racing scene, and that’s when a friend told him to buy a sled. True to his nature, he went out and bought one. It was a 2003 Ski-Doo Summit 800 151-inch (ZX chassis), and on November 11, 2005, Norona had his first experience on a snowmobile.

He remembers it well.

“It was a beautiful sunny day—hardpack with about 15 centimetres on top and I just remember thinking, holy crap, this is awesome,” he said.

And he was hooked.

The very next month, Norona upgraded to a 2005 Ski-Doo Rev, and by the end of that season he had logged a total of 5,000 kilometres.

Eventually, Norona got a sponsorship with Ski-Doo through Greater Vancouver Powersports and snowmobiling became more than a hobby—it became a source of income as well. Today, Norona is a full-time ambassador for Ski-Doo and he spends his time promoting the brand and the sport he loves.

Norona is also an active member of the Black Tusk Snowmobile Club in Squamish, B.C., and a supporter of the British Columbia Snowmobile Federation and the Canadian Avalanche Centre. He believes in growing the sport, and feels that it needs more of the younger generation to support their local clubs, even if it just means buying a trail pass.

“It doesn’t take a lot of money—just a lot of people with a little money,” he said.

When it comes to his riding style, Norona is more into the deep-powder riding than hucking his sled off cliffs or hitting 50-foot booters, and his best days are the ones that are so socked in with snow that he can barely see.

“When it’s gnarly and there’s no one out, that’s my favourite,” said Norona.

Although his core group of riding buddies are a bunch of unknowns in the sledding world, Norona has been spotted alongside big-name riders like Brett Turcotte and Heath Frisby. His connection with Ski-Doo has also taken him to major sledding destinations in B.C. as well as the U.S. His all-time favourite, though, is back home at Brohm Ridge near Squamish.

“Brohm Ridge gets busy at the beginning of the season because it’s the easiest place to get into,” he said, “but once Brandywine and those places open up, no one goes there.”

Norona is always reinventing himself as a rider, and for him, snowmobiling is about more than smashing fresh powder. If the riding areas are all rooped up, he does the sled-skiing thing. He has yet to have a bad day of riding.

When you get out there snowmobiling, he said, or doing any sport, it’s really just about the adventure and being in the backcountry.

To learn more about Dave Norona and his adventures, visit Norona Life.