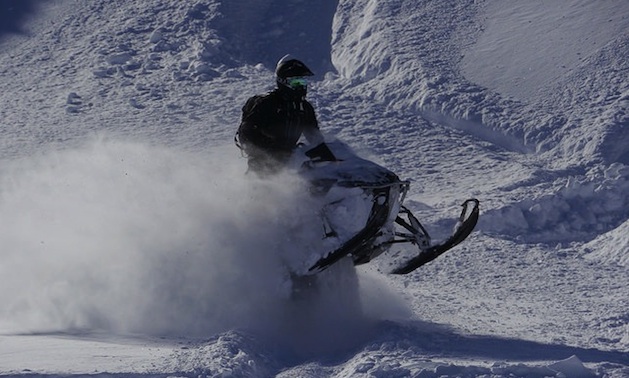 From a young age, Josh Hartikainen was a gearhead. Often found at the local dump, he and his brother Sean would find junk to bring back to life, including their first snowmobile—a John Deere. They used their imaginations to create a Franken-sled dream machine with paddles bolted on. The brothers waited eagerly for crusty snow conditions to unleash their one-lunged beast.

“Today I dream of fresh deep powder,” said Hartikainen, “but when I was young it was the cement-crusted snow that was our perfect snow condition.”

After struggling with snow stucks on the old John Deere, Hartikainen was somewhat disenchanted at the thought of snowmobiling. It seemed like a lot of work with very little reward.

Encouraged by a friend, he begrudgingly agreed to try mountain riding with a mountain-specific machine. Much to his surprise, he found himself instantly hooked. Who knew it could be so fun?

His first sled for mountain riding was a 2003 Arctic Cat Firecat 800, modified with a longer track to accommodate mountainous terrain. He found himself in a state of sled obsession. His next purchase the following year was a turboed 2009 Arctic Cat M8. Performance enhancement has always been a part of his mechanical direction, so he decided to amp it up a bit.

Some sledders struggle with tuning and the extra mechanical knowledge needed for turbo sleds.  It isn’t simply pull and go. Hartikainen is familiar with turbo applications in cars, and he knew he was ready for the commitment of a boosted sled.

“I have patience to tinker and tune and a passion for mechanics, so I was confident I could run and maintain a turboed sled,” he said.

Now on a 2013 Arctic Cat M800LTD with a Boondocker turbo kit, Hartikainen hits every steep treeline with confidence. He enjoys tight, technical terrain, pushing himself and his machine to the limits. Living in a boondocking paradise, he said that his favourite Nelson area destinations are Redfish Creek, Rover and up the Valhallas, where he has ample opportunity to push it and grow as a rider.

“I want to know the people I ride with have my back in all situations,” said Hartikainen. “Someone you know will come find you, even if it is dark out and their gloves are wet.”

Riders like Billy Stevens, Bryan Beaudry and Tad Jacobson are his wingmen out in the backcountry.

Hartikainen has words of advice for riders just starting out.

“Have patience, and don’t get frustrated. There is a very steep learning curve with sledding, but the rewards are worth it.”