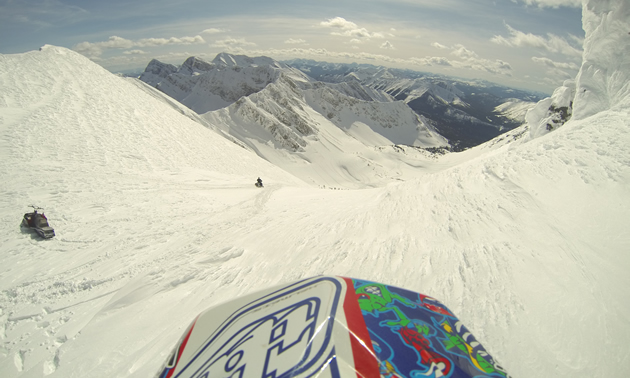 For Brent Linderman, snowmobiling means freedom—especially because he can experience it right in his own backyard. As the owner of Arctic Edge Motorsports in Hillcrest, within the municipality of Crowsnest Pass, Alberta, Linderman spends a great deal of time riding in the area. His favourite destination is Lost Creek.

Linderman, 38, has been snowmobiling since he was five years old. He loves to ride with his two older brothers Randy and Dale and his nephews Ryan, Brett and Austin.

The Lost Creek area boasts various types of riding all in one place, from technical terrain to tight trees, steep gullies and frozen creek beds. According to Linderman, there is also great trail riding when the snow is good. There have been two new cabins built on the north and south sides and the local club does an amazing job at grooming the trails.

Linderman said the best riding comes later in the season, in February, March and April. Two years ago, he and his brothers had a great ride in late April in the Lost Creek area.

There was an amazing snowfall so the group headed out to Lost Creek Cabin.

"You can get there from two directions, either from Castle Falls or from York Creek. Either way, it's about 15 to 20 minutes to the cabin and then beyond that, there is about 60 to 80 kilometres of trail or more," said Linderman. "Because of a fire in 2003, there is a burn which features great riding in lots of snow. We also love riding from Alberta to British Columbia back and forth, especially, again, if there's good snow."

Linderman loves riding with his family because they all ride the same.

"We all have the same riding style," said Linderman. "We like the really technical riding, steep terrain through trees and going up and over into B.C. and back to Alberta. We all ride the same and think the same when we're riding, so we get along really well."

A few years ago, Linderman's brother Dale got into some trouble. Dale was climbing, turned and came over a bunch of rocks and broke his pelvis.

"The helicopter came very late at night," said Linderman. "It was very dark by the time it came. While we waited, we built a fire and got Dale comfortable. We made sure he was warm. We were ready to spend the night there. It  was a bit scary for sure."

Linderman is getting ready for the upcoming season and hopes to have a great snow year so he can get out with brothers and nephews and have some really good rides.

"What I love most about snowmobiling is the freedom," he said. "You're just out there with no speed limits and you can go where you want. You're free when you're out there riding it, and the country around here is just beautiful."