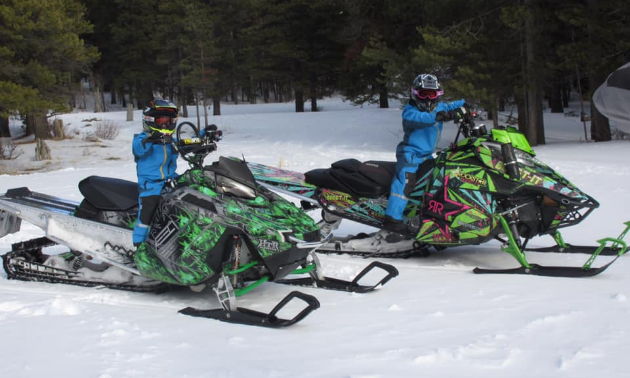 Alyssa and Brandon Plaza are stoked to have a snowmobile mentor to look up to in Kelsey Poelt. Photo courtesy Kelsey Poelt

Introducing the next generation to snowmobiling can come about in a variety of ways. For some, it’s an intentional inclusion to share the love of sport with youngsters. For others, it comes from the little ones’ curiosity and incessant questions about sledding. For Kelsey Poelt, president of the Crow Snow Riders in Crowsnest Pass, Alberta, her initiation into sledding came about from her father’s lack of options.

“My dad, Ray Poelt, got me into snowmobiling when I was about two years old,” Kelsey said. “If he wanted to ride with his buddies on his days off, he had to take me with him. When I was three years old, my dad was climbing in Window Basin with me in front of him and I rolled the sled, blowing my boots right off of me. Ever since then, I’ve been hooked on sledding.” 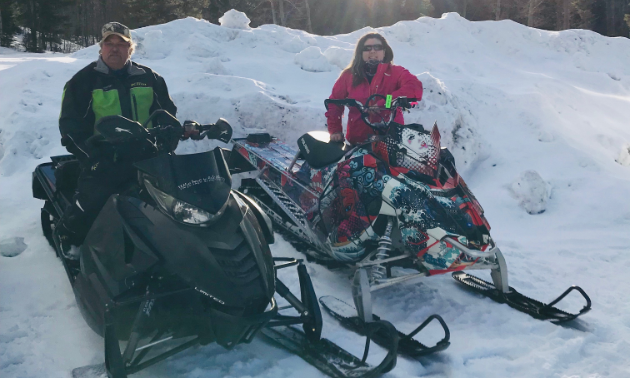 Those early memories together started off what would become an inseparable relationship between father and daughter. The pair has been riding together for over two decades.

“I can only count a handful of times when I have rode without him in the last 20 years,” said Kelsey. “It is a passion we both share and will continue to share for years to come.

“He’s always saying it would have been so much cheaper to buy me Barbies instead of making me a motorhead.”

However the partnership came about—be it begrudging or willing—the Poelt family have stitched together a tight bond with snowmobiling as a lasting fabric.

Passing on the passion

A love for snowmobiling is an infectious thing.

“I love sharing my passion for sledding and pushing myself to be a better rider so I can pass on little tips and tricks to other riders,” said Kelsey. “I love being out in the forest surrounded by the beautiful mountains and getting away from reality. Sledding is my happy place.” 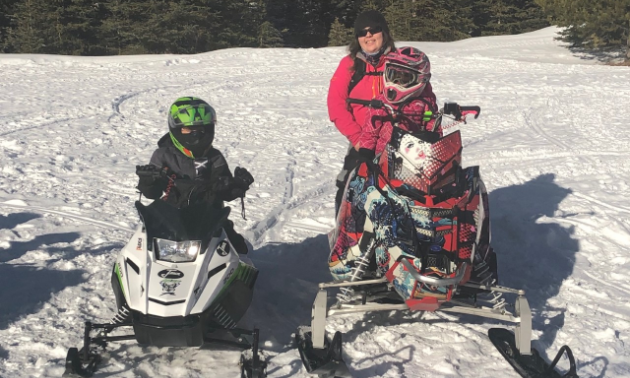 Kelsey has harnessed that passion and is pleased to pass it on to the next generation of sledders.

“I love taking newbies, kids and out-of-town people out snowmobiling, showing them the beauty that the Crowsnest Pass has to offer and seeing the smiles on their faces when we sit on top of a ridge, taking in the 360-degree scenery,” she said. “When I take flatlanders out, I try and get them out of their comfort zone when riding. I’ve had a lot of people swear, cry and yell at me when I’m pushing them. But once they’re sitting up on that ridge taking in the jaw-dropping scenery, they usually apologize, ha ha!”

Kelsey has a few little protégé that she mentors, most of whom have been on sleds since they could walk.

“Every ride is memorable with younger kids,” said Kelsey. “With little braapers around, you just watch their excitement. You never know what is going to come out of their mouths. I listened to Mia Jensen scream ‘weeee’ for miles when I took her out. To listen to a kid get that excited about riding makes a person smile and chuckle.

“Cash Cartwright is my little braap buddy. He’s seven years old and loves to rip it up on his ZR200. Watching him grow and ride is amazing. He gets braver every time he goes out. We sidehill up the bank, wrong foot forward or jump a mogul and he is right behind us doing the exact same things. His parents teach him avalanche safety and he gets excited to show off his beacon and radio to all the other riders we meet on the trails.”

“Oh, to be young again—to have no fear and just let ‘er buck,” Kelsey said. “To all the young braapers out there, grip it and rip it!”

Introducing the next generation to sledding isn’t just a fun way to pass the time with them, it’s essential in order to keep the sport from becoming a thing of the past.

“I can’t say this enough: young riders who have a passion for riding need to step up so everyone can hear their voice, especially with new laws and provincial parks changing the sledding game,” Kelsey said. “I am one of youngest directors in our club and have been part of the club for the last nine years. I am disappointed that there are not more young riders who are part of their local club, standing up and trying to work with the government so they can ride their favourite areas for more generations to come.

“I know people don’t want to think the worst—that sledding will get washed away to the wayside, especially backcountry riding off of main groomed trails—but it could happen if more people don’t join a club, voice their opinions and show their passion for riding. Once the older generations resign, we will need younger people to step up to the plate or we could lose something we all love to do.”

“Both areas offer groomed trails, open meadows, tree riding and hill climbing,” said Kelsey Poelt. “It doesn’t take long to get into both basins—15 to 20 minutes and you’re surrounded by beautiful mountains. Both areas are awesome for families, new riders or people who are pushing themselves to be better riders by gaining confidence and trying new riding techniques. Both warm-up shelters are pretty close to these popular areas as well.”