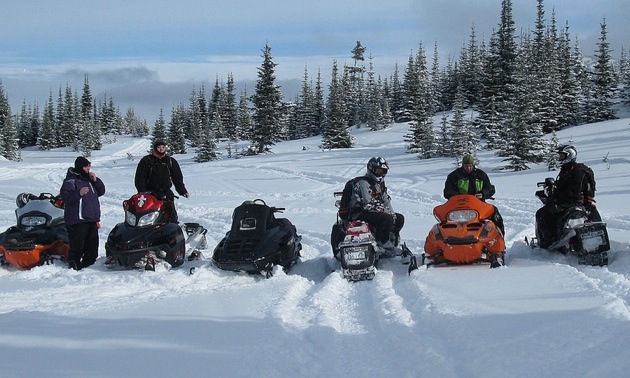 Photo courtesy Kelsey Poelt Sledding with those who know the terrain contributes to safety and a great day of riding.

Riding since she was two, 23-year-old Kelsey Poelt lives and breathes the great outdoors.

“There is nowhere I’d rather be than the Crowsnest Pass," said Poelt.

“It is a very outdoorsy town with life revolving around adventures in the backcountry,” Poelt said.

Hunting, fishing, camping, ATVing and, of course, sledding are all ways of life for the people of the Pass, who take great pride in their community.

Poelt is a member of the Crow Snow Riders—her hometown snowmobile club—which consists of about 100 members. She enjoys working with her club, helping out in many ways. Outreach is something Poelt feels very strongly about. It’s very easy for someone unfamiliar with the terrain in the Pass to end up lost, disoriented or in harm's way. Weather often changes suddenly and without warning, creating conditions of low visibility and the chance for riders to become disoriented. The terrain can become steep and challenging quickly as well, so it is best to ride with those who know the area well.

“I would rather newcomers ride with locals who can help them stay safe," said Poelt.

Poelt quite often rounds up sledders and encourage them to travel with their group, and feels thankful to be able to make a difference.

Inheriting her love of the sport from her dad

Much of Poelt's approach to the great outdoors has come from her father, who from the time Poelt was two happily took her along for the adventure. While her father is proud of his daughter’s skill and sense of adventure, he admitted it would have been less expensive had his she-shredder been enamoured of Barbies instead of braaaping!

The more the merrier

Encouraging the purchase of trail passes is another task on the to-do list for Poelt and the Crow Snow Riders. The maintenance of trails facilitates everyone’s enjoyment and provides a safe environment for sledders of all ages.

Along with other club members, Poelt works hard to spread the word. Membership does matter, especially when you have hard-working club members like Poelt.