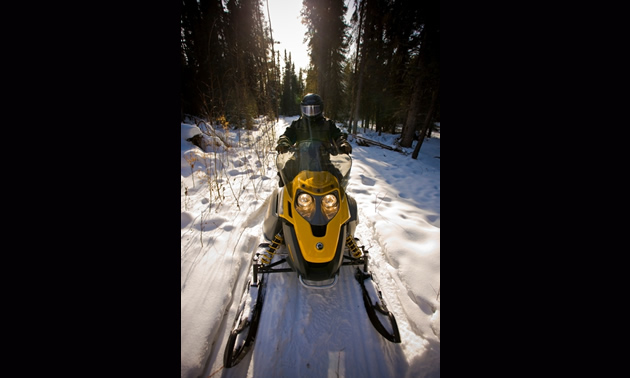 Prince Albert is a hub for snowmobilers, with numerous trails running from central to northern Saskatchewan. Although there is no snowmobiling within city limits, there are some amazing rides that begin just outside the city. While Saskatchewan is best known by non-residents for its farmland, the province is actually 70 per cent forest. In this particular region, grassland mixes with boreal forest, producing an awesome beauty and providing the visitor with a great variety of sightseeing and nature-viewing opportunities.

According to Jayne Remenda, executive director of the Prince Albert Tourism and Marketing Bureau, a must-do snowmobile ride would be from Prince Albert to Candle Lake. The popular route can also take sledders even farther—to Christopher Lake and then back down to Prince Albert, for a round trip of 170-plus kilometres.

"Another wonderful lake sledders can visit is Anglin Lake, near Christopher Lake," said Remenda. "There is a wonderful all-season resort up there called Land of the Loon Resort. It is a very popular place for snowmobilers as it's right on the lake. Sledders can spend the night there and continue on their trip. Ice fishing is also very popular here if people want to take a break from riding."

To get out to explore these lakes, snowmobilers should leave Prince Albert from the south end, go around the city and from there they can look forward to both incredible scenery and an abundance of wildlife.

Remenda said there are a number of premier destination hotels in the city.

"It is very convenient for sledders to stay in a hotel like the Super 8 or Best Western right on edge of town, so they can take their sleds right from that point out of city limits," said Remenda.

The Land of the Loon Resort is located about 40 minutes from Prince Albert and Remenda said this is a great halfway point for those doing a longer trip.

Sledders who will be in the Prince Albert area for more than a few days can explore the trails at Christopher, Candle and Anglin lakes as well as the groomed trails around the city itself. Remenda recommends picking up a snowmobile trail map at the visitors centre in Prince Albert. 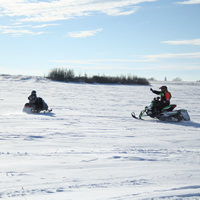 Duck Mountain Provincial Park, SK Sledding is all about family time for this Saskatoon rider

Erik Foster, his wife and two kids enjoy bonding time together on trails in Saskatoon, Candle Lake and Hudson Bay.