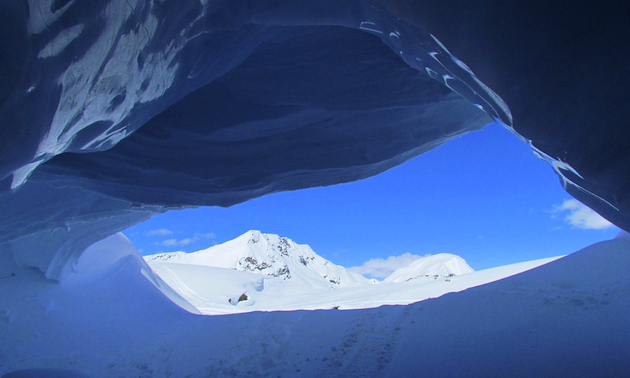 Known as the Jewel of the Yellowhead, the village of Blue River, B.C., is located halfway between Vancouver and Edmonton on Yellowhead Highway 5. Nestled between the Cariboo and Monashee mountain ranges, Blue River's inland boreal forest creates a climate in which the average snowfall at the valley bottom can reach 22 feet. The area’s claim to fame is “steep and deep,” and from November to April, riders are able to leave from their doorsteps to explore a number of trails ranging from easy to moderate to difficult; four trails are groomed by the Blue River Powder Packers snowmobile club and other ungroomed areas abound.

Groundhog Mountain offers two easy-riding peaks popular with beginner riders and families.  From a single access point, go west for an introduction to tree riding or east for open meadows and a perfect day of deep-powder play.

Elevation: 6500 feet
Driving directions: Head south from Blue River on Highway 5 approximately 22 km, then turn left onto Finn Creek Road, which is located on the south side of Messiter Summit.  Parking is available.
Distance from community: 22 km
Grooming season: From December to March
Difficulty rating: Easy

Excellent for intermediate riders, Foam Creek offers ample boondockin’ opportunities amid the fresh jumping powder that covers countless coulies, holes, hills and bowls. Here, creek beds that fill with 15 to 20 feet of snow serve as natural highways to the alpine.

Elevation: 6500 feet
Driving directions: Same as Groundhog Mountain, head south from Blue River on Highway 5 approximately 22 km, then turn left onto Finn Creek Road, which is located on the south side of Messiter Summit. Parking is available.
Distance from community: 22 km
Grooming season: From December to March
Difficulty rating: Moderate

Groomed to within four kilometres of the alpine pine, it takes an experienced rider to enter Salmon Lakes. The area is the largest in Blue River and boasts the most extreme terrain; steep and deep powder and excellent tree riding. Seemingly endless lakes are the reward for riders who have the skill to make it up the first draw.

Elevation: 3500 to 7000 feet
Driving directions: Salmon Lakes can be accessed from the main Finn Creek parking area.  Head south from Blue River on Hwy 5 approximately 22 km, then turn left onto Finn Creek Road, which is located on the south side of Messiter Summit.
Distance from community: 22 km
Grooming season: From December to March
Difficulty rating: Difficult

A true backcountry pioneer, Blue River rider Robin Tyacke earned his nickname, the “local mountain man,” by beginning to log his 50,000 miles in the area before its development into the snowmobiling destination it is today.

“When we first started sledding here in the '80s, me and my friends pioneered a lot of the backcountry,” said Tyacke. “There was only six or eight of us here in town that used to snowmobile this backcountry with our little sleds back then.”

In the 1990s, Tyacke became a founding member of the Blue River Powder Packers snowmobile club and began promoting the area as a destination for out-of-towners to enjoy.

Tyacke said Blue River’s biggest draw is the steep and deep terrain, a perfect match for his personal mantra: “the deeper the better."

“My favourite style of riding is boondockin’ through the trees—more technical riding,” said Tyacke. “It’s more challenging. You can push yourself and your machine and see if you can get out of it. I like the adrenalin.”

And while he said that style of riding can be found on any of the groomed or ungroomed riding areas in Blue River, Tyacke added that Salmon Lake is his favourite run.

“It’s pretty challenging to get up the first little draw, but then it just opens up and there’s lake after lake after lake,” said Tyacke. “It seems like it goes on forever, and the snow is always deep there.

“It could be calm in town and you look over to the east and you can just see it storming over there all the time. It gets big snow, and because you’re in the trees, even if it’s storming there’s lots of tree riding there.”

Tyacke said he rides the area at least 12 times a season, but he never tires of it.

“It’s always challenging because the snow gets so deep here,” he said.

Tyacke is currently riding a 2011 800 Arctic Cat, a sled that he said can sustain his riding style and the thousands of miles that he logs.

“Arctic Cat sleds don’t break down,” he said. “They’re nice and nimble to manoeuvre and easy to sidehill. Before I bought this one last February I had a 2010 800 Arctic Cat and I put 4,000 miles on it; that motor never blew up on me once.”

Tyacke and his wife, Patti, run the Holy Smoke Inn B&B, which they say is swamped with snowmobilers from December 1 right to the end of April or middle of May. For information on accommodation or riding in Blue River, contact the Tyackes at 1-250-673-BLUE (2583).

Know before you go

Riders are required to purchase trail passes for riding areas that are under management agreements. Trail passes are $20 for a full day of riding. Riders interested in supporting the Blue River Powder Packers and the development of the area are also able to purchase a club membership for $50.

The Blue River Powder Packers are currently working on developing trail maps and expect the maps to be available at local lodging providers this season. Riders can also contact the Glacier Mountain Lodge or the Holy Smoke Inn B&B for riding information.

The Blue River Powder Packers pride themselves on being stewards of the environment and work to conserve the natural habitat and wildlife of the area. In an effort to sustain the native mountain caribou population, backcountry areas considered sensitive are closed to sledding. Riders are asked to obey boundary signs and to be conscious of the sustainability of the environment. Booths at both the Finn Creek and Red Sands parking lots offer information on wildlife closures as well as maps showing the boundaries of sensitive wildlife areas and current weather and avalanche forecast information. 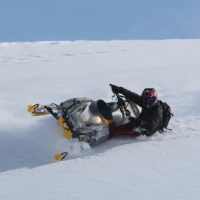 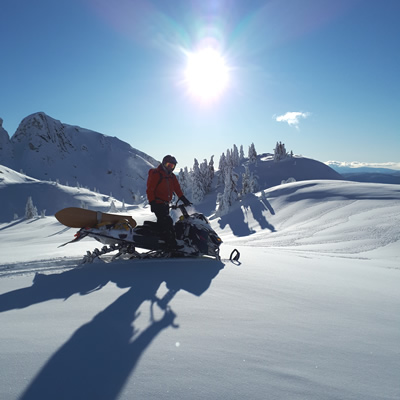 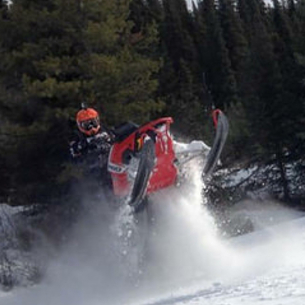