Some people say the greatest gift in life is being able to see the upside of bad circumstances, and one group of snowmobilers from St. Paul, Alberta, would agree.

Dave Noel, vice-president of the St. Paul Trailblazers, said the best ride he and eight other sledders ever took was riddled with breakdowns and had a solemn purpose.

In March of 2009, veteran snowmobiler and past president of the Alberta Snowmobile Association Albert Beck was killed in an avalanche in Blue River, B.C.

“He was riding in a known, safe area and was the most avalanche-aware rider ever,” said Noel.

News reports said Beck deployed his air bag and was rescued promptly, but he later succumbed to his injuries.

“That’s the thing about avalanches—they are never where you expect them,” said Noel.

Beck, a native of Antler Lake, Alberta, was well loved in the community—enough so that nine riders from St. Paul and the surrounding area decided to make the 440-kilometre round trip from St. Paul to Fort Saskatchewan by sled to pay their respects at Beck’s wake.

Jerry Bidulock, owner and general manager at Power Merchants dealership, had the idea to organize a ride to pay respects, and Noel and the other sledders had no trouble agreeing. The group arranged the trip in less than a week. Beck had been a longtime friend and customer of Power Merchants.

“Jerry and I talked right away about riding and organizing it," said Noel, "and with just a few phone calls, we wrangled up a few guys.”

Determination put to the test

Noel said the group left first thing in the morning and took the better part of a day to make the trip. They stayed the day and rode back. The entire ride took eight hours to get there and far fewer on the way back, mainly because of trouble on the trail on the way to Fort Saskatchewan. Normally breakdowns are few and far between, said Noel, but it seemed the group’s dedication was going to be put to the test on this ride.

Bidulock did a bit of research with his truck and logged GPS co-ordinates and road and river crossings.

“He mapped it out and knew where we could skip across fields,” said Noel. “We crossed an area in the vicinity of Fort Saskatchewan where they don’t allow riding in the ditches, but we did it anyway because of the nature of the trip. We also had some mishaps—a track ripped out and another fellow rolled and wrecked, but every one of us made it.”

A short distance out of town, a belt blew on someone’s machine, said Noel. The rider jumped on another machine to get parts and right away the track ripped out.

“Both of those were demo machines,” said Noel. “People don’t always tell you exactly what happens on their test rides.”

Someone managed to track down a belt and got both machines running. The group met other riders from Moose Lake in Abilene, and on the Iron Horse Trail at Ashmont someone’s machine cartwheeled off a snowdrift that was off-camber and rock-hard. The rider wasn’t injured, found another machine and caught up in Smoky Lake, said Noel.

“Then at Smoky Lake another rider had one slider in his machine come out and another was damaged," said Noel. "We stopped for fuel (and) just happened to see a local guy with an Arctic Cat trailer and asked him if he happened to have the parts we needed—he did. We did a roadside repair and off we went.

“You know, we travel thousands of kilometres and rarely have problems,” laughed Noel. “We made it there and had a nice dedication to the gentleman.”

The ride home was eventless, partly because the riders knew the trail better and also because they were ferried around a flooded section of the North Saskatchewan River.

“In all of the fantastic rides, that leads off as one of the most fantastic ever,” said Noel. “The reason for the trip wasn’t the best, but it was extremely well received in honour of a fellow who would have appreciated it dearly.” 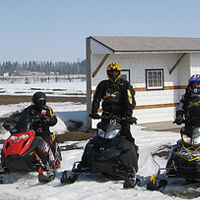 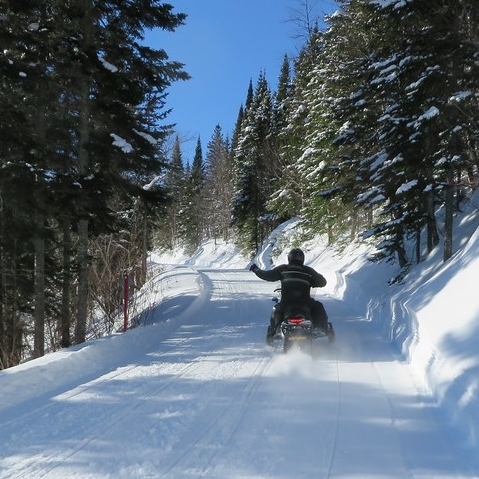