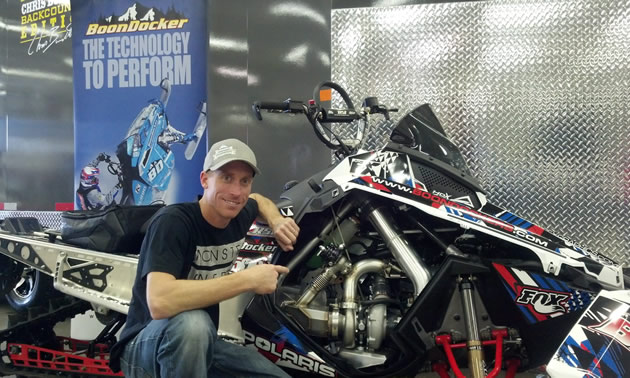 A turbo-charged engine, a.k.a. a boosted engine, refers to the use of exhaust gases forced through turbines to produce more horsepower. In order for the turbocharger to work, there needs to be enough exhaust pressure to spin or spool up the turbines.

Boost was first applied to the aviation industry in 1918 when General Electric engineer Sanford Moss attached a turbo to a V12 Liberty aircraft engine. Nearly 100 years later, turbo technology is firmly embedded in the world of snowmobiles. More reliable than ever, boost is appealing to a wide demographic of enthusiasts.

In the days of the first snowmobile turbos, many a four-stroke hero scoped out the biggest chutes and prepared to giv’er all he had. These machines were incredible powerhouses, with the intention of climbing the unclimbable.

Today’s turbo applications are not just for the Ricky Bobbys of sledding—the ones who “just wanna go fast.” Boosted sleds give you that little extra oomph to facilitate more technical riding.  Check out Chris Burandt, Dan Adams, Keith Curtis, the boys from Top Secret Shop and Bret Rasmussen in the latest sled films. Your mind will be blown away as they shred insanely steep tree-lined slopes that the average rider would see as impossible.

Sleds with shorter tracks are now being turboed, especially 153 2.6-inch and 156 three-inch tracks, creating the perfect balance of agility and power for the serious hucking, jumping boondocker.

Not just for pros

Nearly four years ago, I found myself intrigued by the horsepower of my husband’s sled. Once he felt I was ready, he turned to me one sunny deep powder day and said, “OK honey, it’s your turn, time for you to try a turbo.”

My excitement was followed quickly by embarrassment as I had difficulty controlling the power and keeping his boosted M8 on a basic logging road. Side to side I flew off the road, trying to get a feel for the throttle. My sled bros and husband laughed at my steep learning curve, but then taught me the art of throttle control, blips, feathering the throttle and when to hold it wide open.

Teaching me how to harness the extra ponies worked in their best interest as well, for our ride adventures were often insanely technical as we explored the Kootenay backcountry. If you stop and think about it, it makes sense. Giving me, the most novice rider, a bit more horsepower allowed me to not only keep up, but really enjoy the entire day of riding. Boost took the pressure off me and allowed me to pick my own lines in steep off-camber situations instead of having to follow the tracks of others. I enjoyed the challenging terrain rather than feared what was to come. I gained not only skill but confidence as we explored endless areas of untouched awesomeness. After experiencing boost, I embraced my throttle rather than feared it. Ricky Mommy, here I come!

Earlier kits had some issues when it came to performance and reliability. The most common complaint was turbo lag, which is the amount of time it takes a turbo to spool up before becoming responsive. Performance consistency was an issue due to this lag, for if you completely let off the throttle and then tried to go back into acceleration, the machine wouldn’t respond in time to be effective. Many a stuck, stumble and unplanned journey into the handlebars occurred. Turbo companies have become serious about performance and tackling turbo lag.

One of the most respected and industry-leading performance companies on the planet is Rocky Young’s BoonDocker Performance, based in Idaho Falls, Idaho. The company was founded in 2000 and since then, Young and his team have worked hard each year to answer the demands of eager enthusiasts and keep their products moving forward.

Through years of electronic and mechanical R&D, BoonDocker Turbos consistently provides rock-solid kits with strong performance. One of their most exciting new innovations is their Electronic Boost Controller (EBC) with Throttle Position Sensor (TPS)—which provides incredible response, knocking turbo lag out of the equation. The EBC measures elevation and automatically adjusts boost to compensate for elevation changes, thus reducing the need for incessant tuning on the trail. Incorporating the TPS with the EBC now enables the system to match the throttle position to the boost output.

For example, if the EBC maximum boost is set at 10 psi, then at 100 per cent throttle the machine will receive 10 psi. At half throttle, the machine is set to receive five psi. The world of tree riding has never been so fun, as boosted tree riders now have the ability to feather their throttle and really work it in the trees, rather than the all-or-nothing hammer-down application from earlier turbo kits.

Again, with a wealth of experience behind this crew, Dave Micku and his sons, Brandon and Kyle, of Top Secret Shop (TSS) in Salmon Arm, B.C., are producing turbo kits that simply work. At the Alberta Snowmobile and Powersports Show in Edmonton, Alberta, they were eager to unveil their latest design—which shocked many a show-goer. Their TSS turbo appears to be mounted sideways in the sled. This unique pipe-mounted turbo enables the system to spool up quickly, again minimizing turbo lag.

Another force to be reckoned with this season is Shawn Davenport of Mountain Tek (MTNTK) Performance in Ashton, Idaho, and his crew’s current turbo kit for the Polaris Pro-RMK chassis. They offer a pump gas and race gas kit, which utilizes a Bully Dog programmer that completely reflashes the stock ECU—creating a system that needs no outside tuning. This reflash allows the unit to register like a stock sled with turboed capability. Their titanium aluminide turbine wheel weighs a fraction of what a normal turbine weighs, allowing it to spool up quicker and easier and combatting the existence of turbo lag yet again.

Do you want just a little bit of oomph?

Today’s turbo setups give you a variety of choices when it comes to power output, which is why lower boost kits appeal to a wide range of enthusiasts. Low boost, running at approximately 175 horsepower, provides a noticeable advantage in power—while still being economically friendly since you can utilize lower octane fuel, such as 91 non-ethanol premium, from your local gas station. This type of turbo appeals to many riders—from seasoned to beginner and tree rider to hucker. The ability to utilize pump gas fuel justifies the craving for boost that much more.

To further ensure system integrity while using pump gas, BoonDocker’s E-Key Timing Module is a simple plug-and-play device that works to retard timing as RPMs rise, effectively reducing the chance of detonation. Sleds can run higher pounds of boost with a lower octane fuel. Not only is the timing key great for lower horsepower boost kits, it’s a way of providing a bit more insurance to your fuelling system in general.

The TSS boys have developed a beginner boost kit that is preset at five pounds. Their electronic fuel controller comes preset so that after the installation, the rider need not make any other adjustments. It’s just pull and go.

Do you want a lot?

As you begin to turn up your boost, the octane of your fuel needs to follow suit. Do NOT rely upon octane boosters to run your turbo system. Most kits will throw a det code or a low octane code if the fuel is not compatible, but is it really worth taking a chance?

“Why someone would invest $12,000 into their turbo system and installation only to rely upon octane boosters for his fuelling integrity is beyond me,” said Sessions. “Is it really worth saving $30 when you think of the consequences?”

Another option for fuel is aviation fuel, or Avgas—which, when independently tested, gives a consistent octane value of around 104.

“Aviation fuel is the most strictly regulated fuel on the planet,” he said. “No matter if you are in Russia, Sweden, Canada or the U.S., quality control ensures you will be getting high quality fuel with the appropriate octane level for your application.”

The consensus remains consistent across the board. When asked about his opinion on Avgas, Brandon Micku feels the same way.

Aviation fuel is readily available in most every community. We can purchase Avgas at our local airport for anywhere between $1.50 and $2 per litre, compared to race fuel—which runs us anywhere between $4 to $6 a litre for C12. Many bulk fuel stations will sell aviation fuel by the barrel, again saving you a little bit more by buying in bulk.

VP and Sunoco fuel supplier Jason Whittaker is kind of like the lonely Maytag repairman of the sled world.

“With so many companies offering economically friendly lower boost kits, the need for C12 race fuel has become drastically reduced as people can run basic 91 or Avgas at a fraction of the cost,” said Whittaker.

He too is enjoying his BoonDocker Turbo with the new TPS EBC setup. Once the go-big-or-go-home chute climber with his turboed sleds, Whittaker now enjoys a whole new style of riding his boosted beasts.

Running upwards of 10 pounds of boost pressure, you’re now venturing into race gas territory. Higher octanes of fuel are demanded to ensure the integrity, performance and life of your system.

The most common race fuel used is an octane of 112, commonly known as C12, which, in Canada, can run anywhere between $4 to $6 per litre—depending upon the location, strength of the Canadian dollar and volume purchased.

The Sunoco Race Fuels website has some tips on storing your fuel to insure integrity:

All in all, turbos have come a long way in technology and application. With reliability, affordability and performance at an all-time high, many riders are now stepping back into the world of boost.

All manufacturers recommend having a professional install your kit, which will save many a headache in the long run. Most companies offer great customer service with the ability to speak one-on-one with an expert in times of need.

Take your time, understand your sled, ride safe and have fun!