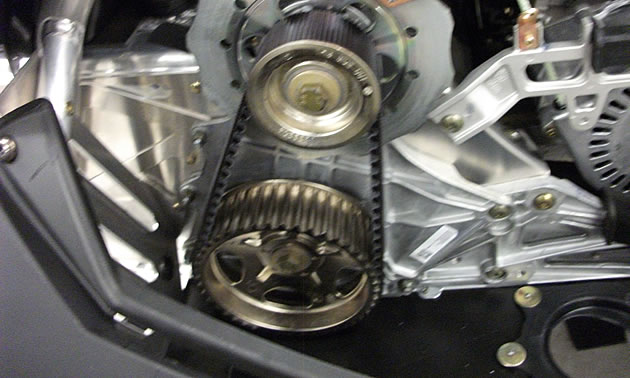 The new QuickDrive belt system on the 2013 Polaris Pro-RMKs has specific needs to maintain its integrity. To ensure proper break-in, vary your RPMs—rather than holding it wide open—for the first 160 kilometres of use. Trish Drinkle photo

Ride it like you stole it, pin it to win it, ride it like a rental—these are common phrases used to described common break-in practices. So what is the proper way to break in your sled? Do your new sled and yourself a favour: if you spend $13,000 to $14,000 on a sled, take the time to break it in properly.

The new 2013 Polaris Pro-RMK brings to light the importance of following the recommended break-in procedure. The new belt drive has specific needs to maintain its integrity. Belt-drive technology isn’t new—it’s been around for years—and it is supplied by companies such as CMX that have incorporated the belt drive as a standard feature of all CMX sleds since 1999. Belt drives used to be a modification that people would pay extra for. Normally, when individuals modify their sleds, extra care and attention is taken when breaking in the new mod to preserve the purchaser’s investment. With the belt-drive technology coming stock in the new Polaris sleds, it appears many individuals are still trying to do the old redneck, rock-it-like-you-stole-it break-in procedure.

Easy as she goes

Do not pin it to win it on this one, my friends. We went right to the source on this one and called the people at Polaris Industries for their insights on the new QuickDrive belt system.

The belt drive is geared square and the belt is grooved square, so it is imperative that sufficient break-in time be allotted for this system. Taking the time to break in the belt-drive gears and your belt only makes sense.

After you have broken in the gear grooves for the belt drive, the next belt installed will not need as much break-in time because the gears will already have smoothed into optimum condition. To ensure proper break-in, vary your RPMs—rather than holding it wide open—for the first 160 kilometres of use.  From the factory, the belts contain a mould-release compound on the surface. This needs to be gradually worn off. If the belt gets too hot, it could mess with the integrity of the belt system. You’ll notice a fibrous residue shed from the belt. Simply wipe it with a dry shop towel to remove the residue. This is completely normal.

As far as engine break-in goes, many people out there do “ride it like they stole it.”  It is recommended that you read your owner’s manual. Excessive heat buildup during the first three hours of operation will damage close-fitted engine parts. Do not operate at full throttle or at high speeds for extended periods for the first few hours of use. Don’t lug or over-rev—just tap ’er cool, and you’ll have an engine that will thank you 10 times over as you shred fresh pow.

Listen to your machine and pay attention to your fluid levels for the first few hours of use. You want to make sure everything is running at optimum potential.

For drive belts, we like to use a Scotch-Brite pad with a little bit of Sunlight soap to remove the coating on the belt that is present from the factory. To properly break in your drive belt, it takes about 48 kilometres. Tap it cool and you’ll extend your belt life considerably.

No matter what you may read on the Internet, following proper break-in techniques could increase the lifespan of your sled. The season will be long and the pow will be deep. Proper break-in procedures equal more ride time. 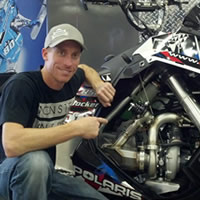