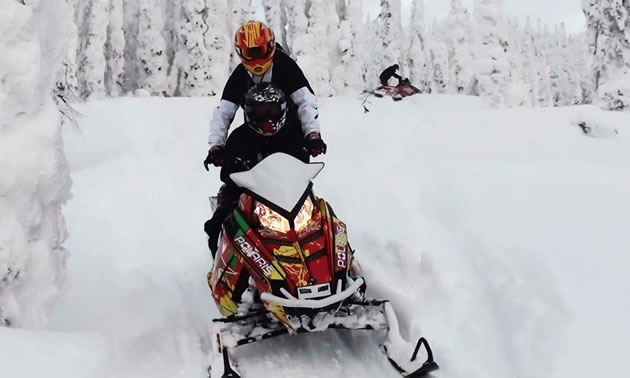 Taking the final leap into only using sleds was quite easy. Brook Evans photo

The chilly night air has little effect on me. I’m cuddled into the most cozy fleece housecoat, a fuzzy toque and my husband’s huge insulated rubber boots, staring at our home lit up in the night. It looks almost fairytale-like—with the smoke gently rolling through the moonlit night. I’m outside taking the little poop monster—a.k.a. our new puppy Grizz—out for a pee. I take a deep breath, right to the bottom of my lungs, and feel the stress from my day at work fade away. The snow comes crashing down off the roof and I see four little faces peek out the window to see what the loud crashing noise was. Winter is actually pretty epic here in Awesomeland.

I think of all the preparations we made in the fall. It was near panic as we cut and piled firewood. Do we have enough food? Better stock up like squirrels! Man, were we naive. It’s all good—a saying I voice often—but in this case, it truly is. I can easily take groceries and supplies up in the skimmer all the time. I don’t have to worry about it. What I need, I can bring up. Sure, they may be in Rubbermaid containers or garbage bags to prevent snow from damaging them, but really, it’s all good.

Taking the final leap into only using sleds was also quite easy. I simply freaked out one day. I was so over the “consequence” part of living up here on the mountain. Our beloved wolf dog Koda was killed from a falling tree. I still, to this day, grieve for my fur baby, so when it came down to it, I am absolutely taking no chances whatsoever.

I drove down the mountain one last day in November. The road was icy and slushy; control was tough to maintain. When I arrived at work, I sent my husband a frantic message that went something like this:

“Honey, I’m done driving. Koda died. I almost ran you over. Knowing our luck, I’ll drive off the side of the hill, end up in a tree, tossing a squirrel into one of the kids' ears, causing them to be deaf for the rest of their lives! It’s time to use the sleds.”

So we embarked on the sled shuttle route, which started off kind of shaky. No one knew where their outerwear was on the very first morning—including me! It was a panic getting ready, but once we loaded up, it was on like Donkey Kong baby!

It’s funny how value changes. My husband and I are used to the most high-tech snowmobiles on the market but our million-dollar baby is a $100 Ski-Doo Grand Touring we call the Grand Puba. It pulls a skimmer, which is a moulded plastic sled perfectly designed to haul stuff and my sweeties down the mountain.

As we started our journey down the hill, the kids woo-hooed with all their might—seriously, this is our life. The smell of two-stroke wafted in the air like pure euphoria. Man, seriously—this is MY life.

My daughter, Brookie, was actually the commander of the Grand Puba shuttle. I rode my husband’s Pro-RMK 800. When we arrived at our truck, I was almost bowled over by the love and excitement of my daughter, Brook, who was beyond ecstatic. Gazing at the other three children, it was plain to see that life is good. Smiles and laughter—this is OUR life.

It’s been pretty smooth so far with the sleds as our shuttle-mobiles. It actually takes less time to zoom down in the morning on the sled than in the truck. We’ve seen so many amazing sights—from epic sunrises to interesting wildlife tracks. You see more of life when you live this connected to the earth. Time spent together is solidified up here in Awesomeland.

The television is occasionally on, as we enjoy DVD sets, such as Duck Dynasty, Criminal Minds and Supernatural (I know, a couple of them are creepy shows that can seriously give you the heebie-jeebies living out in the middle of nowhere).

Furry friends of the family

We talk about the creepy factor often. That is where creepy Uncle Diesel the wolfhound enters the picture as our heebie-jeebie hero. We’ll spend hours watching the cats and dogs. Griz, our new wolf puppy, is the star of the show, with his cocky, sarcastic personality. James the cat (who is actually a girl) is the humour factor. Born with somewhat of a birth defect, James’s hindquarters are kind of out of whack, which gives her no balance. You can try to be as stealthy as you want, but when you fall off of bookshelves, you’re going to get noticed.

Batcat is another favourite. She’s a little black kitten full of energy and mischief. She’ll stalk everything and anything in this house. Brush your teeth too fast and you may end up with a face full of Batcat!

As much as we know our furry friends in this home, we know each other even more. The more intimacy you have the more trust you build. You cannot ever have trust without intimacy. Being in such close quarters, you are forced to know each other. You may not like everything you see, but this momma Honey Badger is absolutely done with unnecessary bickering. That being said, we are all enjoying each other’s company more—inside and outside.

We really love our outside time. We spend more time outdoors than we ever have. Walks, tobogganing and, of course, the most awesome sport of all—SLEDDING!

Another sledder in the family

Leo swore he was not a sledder—he was a boarder. Sledding simply didn’t interest him, but one magical day in December, just before Christmas, that all changed. This is my Christmas Miracle.

On his first-ever encounter on a real sled in real snow, Leo was a superstar. He found his mojo with the snow and was carving, jumping and even became intimately acquainted with a tree well. Now he is hooked, like a trout. My husband, Kevan, showed him what snow was all about, and for this I am thankful. I joked with him, “Thank God! Now I don’t have to wonder if you were switched at birth. You really are my son.”

Sledding is a huge part of our life. Christmas Day was a wonderful sledfest of pow and stucks.  The two bigs, Brook and Leo, practiced their carving skills in some fun terrain by our home. We don’t ever really come down from the mountain if we don’t have to. Our fun time is spent enjoying the outdoor wonderland together as a family.

Putting the brakes on

Now, as for bumps in the road, I have learned to accept that which I cannot change and absolutely not to rush things. Absolutely do not rush. I’m a bit of a workaholic, often staying past quitting time at Main Jet. My husband gave me an ultimatum one day.

Holy smokes! OK, life is busy, so any chance at romance I’m so in like a belly button. I was going to do this. I can win this bet. All I have to do is organize my troops. The kids all had volleyball at the school in Salmo and it ended at 6 p.m. I sent a message to Brook saying, “Boo, I need all of you out of the school and waiting for me at 6:01. Kev and I have a bet and I need to get home by 6:30.” I never told her what the bet was for, just simply that there was a bet. My kids have a competitive nature like their Momma Bear, so I knew I could count on them. I had somewhat of a late start leaving work, but it was only 20 minutes, which gave me 40 minutes to get to Salmo.

I arrived at the school at 5:58 and at 6:04 we were on the road. The kids all had their winter wear on, so when we arrived at the staging spot where we park the truck, we were ready to go. I had 15 minutes to make it. We were so going to do this. The Grand Puba was running like a charm. We were breaking trail through super deep pow, but it cut through it like a butter knife. We came around the first switchback up our long two-kilometre drive with seven minutes left. We were going to make it. I was so happy. Woo-hoo! Then disaster struck.

I hit the first corner with a little too much oomph and white powder, which I normally treasure, was everywhere, blinding my line of sight. Then it happened. I was somewhat off the trail, and we sunk that old Grand Puba. It was stuck like a boat anchor. It took a while of digging and lifting to get it out, but we did, and eventually ended up at the house about 10 minutes late. My husband was laughing so hard. Well, we ended up having a romantic evening after all—spent in the shop installing my sled wrap. A sledder’s date night up in Awesomeland. 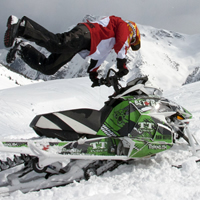 Off the Beaten Track Off the beaten track in Bonnyville

Another adventure begins as the family turns over a new leaf in Bonnyville, Alberta.

Off the Beaten Track Winter in Awesomeland

As the winter and snowmobiling season comes to an end for the family so does the adventure in Awesomeland.

Off the Beaten Track Off the beaten track in January

A monthly column about a family that lives off the grid in the mountains near Nelson, B.C.