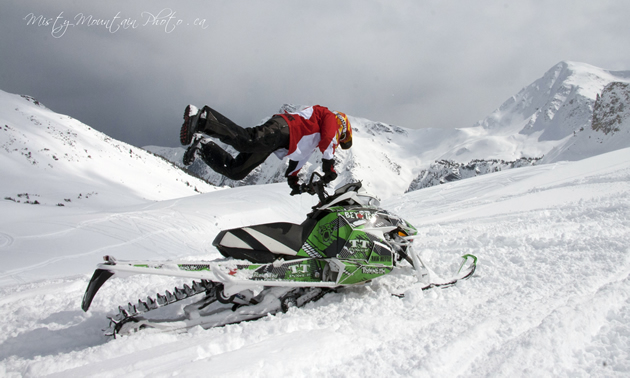 I wondered how life was going to be for our family off our beloved mountain. Leaving the people of Ymir, B.C., was one of the hardest decisions of our family’s life. Tears and a beautiful farewell party at the Ymir Hotel sent our family off on yet another adventure. This was one of a different sort. While we were used to living smack dab in the middle of a mountain—with bears, lynxes, wolves and cougars as our closest neighbours—our new adventure saw us smack dab in the middle of a busy oil town. Bonnyville, Alberta, is our new home.

As we settled in for our first night of sleep, the things that went bump in the night were near terrifying at first. I leapt out of bed. “What is that sound?” To me, it was like a jet engine had taken off. “Honey, go to sleep, it is the furnace,” my husband replied. It had been a while since we had actually had a furnace. The past three homes we have lived in were heated primarily with wood heat.

Thump, thump, thump. Again, I panicked, and raced to the window for fear of what danger lurked outside. Again, it was nothing but a truck with a loud stereo. I felt as weirded out as my wolf puppy, Grizz. He had only lived on the mountain and had never before seen trucks, cars and so many people. We were definitely not up the Wildhorse anymore.

How I missed home. Tears would stream down my face as I thought of my wonderful friends and the beautiful terrain. Knowing and feeling my sadness, my husband took me out for a drive. We went looking for nature.

Reconnecting with the past

As a child, I grew up fishing the lakes all around the Bonnyville area—Wolf Lake being one of great significance to me. My mother passed away 22 years ago, and her ashes are scattered on "Blueberry Hill” on the far shore of this beautiful lake. As we neared the lake, I felt my body start to relax. Flashbacks of epic fishing, northern lights and jamming with our fiddles and guitars by firelight filled my consciousness. I was home, plain and simple. The birch trees were just as I had remembered—there is something special about each one. We saw ice fishermen on the lake and I had a thought that sent me into a fit of giggles. My husband, Kev, looked at me with questioning eyes.

“The kids are going to poop themselves when they reel in their first jackfish,” I explained.

He had not seen a jackfish—the great northern pike being its more official name. Slough shark, jackfish, swamp monster—these fish are big, and they’re mean. They’re good fighters and good eating and man, do they have teeth. My children are used to the beautiful, almost poetic trout species, and haven’t caught one over a pound. They are in for a rude awakening—the thought makes me laugh even harder.

Some of the most fond memories I have of childhood happened on Wolf Lake.

One special morning, my Grandpa Joe and I scurried out of our camp. Well I scurried, tiptoeing so as not to wake up my younger brother, Kurt. As we made our way across the lake, the morning fog still had yet to lift. We were searching for our secret honey hole reed bed, but the fog was making it hard to tell where we were going. Slowly we made our way through the reeds into the honey hole. Not talking, we readied our rods. Cast after cast into the waveless water, we waited for our monster to bite. The ringneck loon called us in his haunting voice.

Typing this, I have to smile. I wasn’t known as a very “nice” sister, for I took every opportunity in life to mess with my brother’s mind. The loon's call was a wonderful tool for torture. Wide-eyed, he would look at me, questioning the sound resonating across the lake. I convinced him the loon was calling him. “Kuuuurrrrrrrrt, Kurrrrrt,” I’d call. Man, so many memories. Shore lunches, blueberry picking and boating over to our own private sandy beach. My children were going to love this.

We came home feeling refreshed. My wild heart found a place to reside. It had reinforced in my mind to never take any gift for granted. We may have not known to ask for this gift, but it is definitely one of the most meaningful gifts of my life. Terry Coulombe, the owner of T&T Powersports in Bonnyville, had taken a chance on me. Taken a chance and followed his gut instinct. He offered our family a fresh start. Times were tough in B.C. Barely making enough to survive, bills consumed every paycheque, leaving nothing to spare. Coulombe’s offer was one we couldn’t refuse. He offered us hope.

Much to look forward to

So many things have come together since then. The home we are in has access to powersports trails right from our doorstep. Today, I took my dirt bike for a ride up the Iron Horse Trail. The beauty of the farmers' fields and marshland took my breath away. That happens a lot here in Alberta. Each night, the sky is painted a masterpiece of orange, pink, purple and blue. The sunrises are equally amazing.

Two blocks to riding and two blocks in the other direction is work. It is only four minutes to my place of work. Can you say easy button? There is more time for our family and more time for each other. This is something awesome.

The second weekend after our move, I was on a different adventure—a snowmobile trip away from my family with my Betties Power Sports Network sisters in Golden, B.C. I am on an Arctic Cat ProClimb now. Switching chassis had me full of nerves. Nerves on top of the nerves I had from leaving my family. I was a flatlander now. We leave home to shred it up in the mountains!

Once we had left the snowmobile staging area near Golden, I felt much more at home. Tamara Osborne, who is head of the Betties Power Sports Network and the co-owner of Raw Mettle Films, was ahead of me. Synchronicity hit and I felt one with the chassis. It may not seem like a big deal to some, but knowing I can actually mesh with a chassis is a really big deal for me. Meshed and then enjoyed the chassis! I climbed and shredded for two days straight. Osborne’s husband, Steve, took every opportunity to film and encourage me on this new ride. Excited and charged—those are the only words to describe knowing the last piece of the puzzle was in place.

Bettie sister Heather White, a.k.a. Heater, was an amazing travelling companion. I have a feeling our road trips will only get even more epic, as we travel to a wide variety of locations in 2014. This is a good thing! Flatlanders can rip! Braaap!

Quite soon, there will be an initiation time for our family as we prepare for epic mudding. Now I’m used to B.C. Most of our riding is amidst dust and dryness. Not so much here, I’m told. Many useful tips for our enjoyment have flooded in, including specific instructions regarding duct tape and rubber boots. We have a lot to learn and I am quite certain it’s going to be messy—with a big dash of epic.

Alberta, thank you for being our new home.

Off the Beaten Track Winter in Awesomeland

As the winter and snowmobiling season comes to an end for the family so does the adventure in Awesomeland.

Off the Beaten Track Off the beaten track in January

A monthly column about a family that lives off the grid in the mountains near Nelson, B.C.

Off the Beaten Track Off the beaten track in December

Snowmobiling has become a way of life for the family.