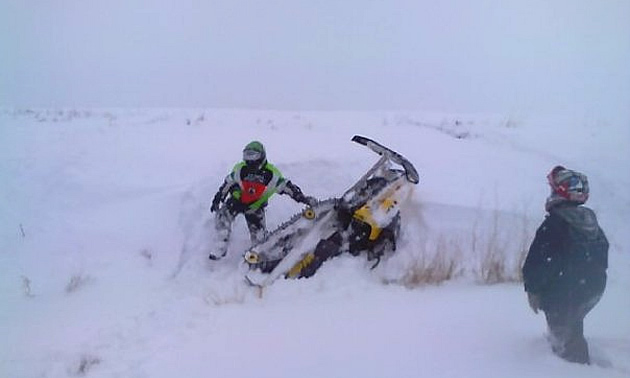 In winter, Lac La Biche is 236 square kilometres of frozen playground for snowmobiling residents of the town by the same name, located on the lake’s southern shore. Avid sledder Evan Morin said between the vast span of the huge lake and 30-foot-wide open areas along the power lines, there is no shortage of places to go hard in Lac La Biche.

“The ice is great because there isn’t much snow on it and you can go to and from people’s houses across the lake,” Morin said. “You can ride all day towards Conklin, and up north towards Fort McMurray on a lot of flat open land, prairie fields,  farmland and some hilly areas.”

The area isn’t rich in established trails. The closest maintained trails are in Smoky Lake and many residents of Lac La Biche work and ride in Fort McMurray. But that just adds to the excitement, and it means sledders in Lac La Biche are hungry for exploration and finding undiscovered places. Morin is one of them. He packed his sled and left Lac La Biche one morning with a friend and no real plan—they just headed out across the lake and stopped a half hour in.

“I asked my friend, ‘So where are we going?’ " said Morin, "and we decided we’d go where we’d never gone before.”

Wherever the trails take us

They had gear packed—including shovels—and called a friend nearby who came with eight jerry cans on a skimmer. They filled the cans at Heart Lake and headed north along the power lines.

“We had so much fun,” said Morin. “We had close calls, rolling over, getting stuck and falling through creeks. At one point, I had my back end through the creek and my front end on the ice in front of me.”

He also had a great rollover heading up a hill with more fear than gas.

“My buddy went up with a 900 so it was no problem. I went right up that hill behind him—and then, right back down that hill,” Morin said. “There I was upside down and they were laughing at me.”

Later, his friend’s machine ended up buried to the hood under five feet of snow when he cased a jump and ended up stuck in a ditch.

Morin started out on a Ski-Doo Mach 1 and now rides a modified Summit 670. He and his friends go through a lot of machines, but can never be accused of not having enough fun.

“At least we know that no matter what, we’ve lived the best life,” Morin said. 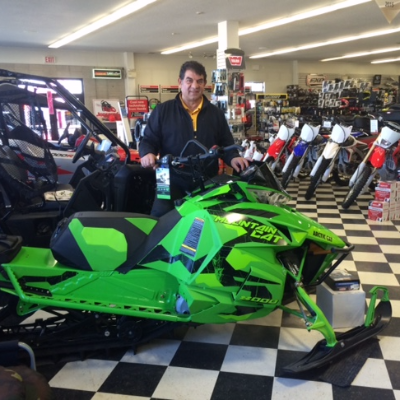 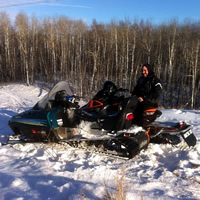 With an expanse of cut lines, power lines and pipelines, the Lakeland area of Alberta around Lac la Biche is a dream for any adventurous snowmobiler.