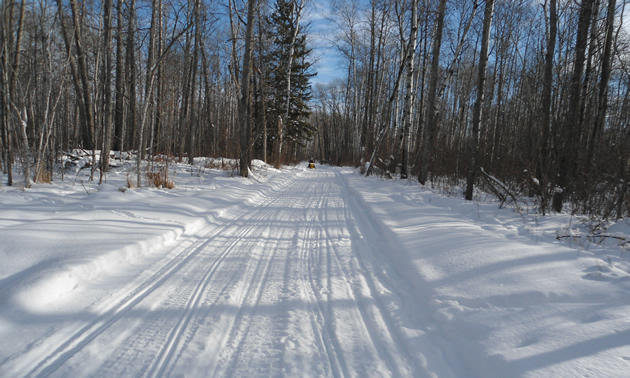 East central Saskatchewan offers a variety of sledding trails in amazing condition. The Lintlaw area and Greenwater Lake Provincial Park, which lie less than an hour apart and not far from Kelvington, provide great bush riding and incredible scenery.

Ron Hughes is a member of the Kelvington Trail Blazers snowmobile club. Since the Lintlaw area club disbanded in 2007, the Kelvington club took over more than half of the Lintlaw trail system. There is a major Ski-Doo dealership in Lintlaw called Lintlaw Service, and this is a great place to stage and to pick up a map. Hughes also recommends downloading the map from the Saskatchewan Snowmobile Association website, as it is the most up to date.

"All the trails north of Lintlaw offer great riding," said Hughes. "There are old logging roads, you cross creeks and go through the bush. You're kind of in the middle of nowhere but not too far away from anything if you need it. Our trails are wide and are always groomed and well maintained. The Kelvington Trail Blazers cover about 400 kilometres of trail, run two snowcats and have full-time grooming."

There really is a mix of everything on the trails around Lintlaw. The first 10 miles after you leave town are open field and rolling hills, but then you get into the bush, which Hughes said is his favourite part. There are eight shelters in the bush so sledders are never more than 10 to 15 miles from a shelter. Hughes said this is nice for families, especially when it's cold out.

"From Lintlaw, you can either stage at the dealership or at the hall in Lintlaw," said Hughes. "You go on the main road out of town, it dives down into a ditch and then you go across fields from there until you hit the bush. The distance is about 40 kilometres to the Assiniboine Shelter. If sledders want to go further, a great ride is up to Weekes."

According to Hughes, there is a friendly hotel in the town of Weekes that offers amazing food. There is also a general store that carries everything from hockey sticks to hunting gear to fuel. You will hit about three shelters on the way to Weekes. It's about 110 kilometres round trip.

"All the shelters are really well maintained with lots of firewood (and) emergency supplies, and we have solar panels for our LED lights," said Hughes. "They are very well looked after."

Hughes loves the variety this area offers. There's tons of snow, a lot of chances to see wildlife and the trails are endless.

"You can go anywhere on our trails through so many different communities," he said. "You can literally come up and stay at Lintlaw, Greenwater (Lake) or Kelvington and ride for days with barely ever crossing the same trail. There is such a variety of trails—from wide open spaces to going up and down hills to touring through the Porcupine Forest, there is so much to see for anybody."

About 300 kilometres northeast of Saskatoon is Greenwater Lake Provincial Park and Greenwater Fisherman's Cove Resort. This area is a top vacation spot in the region, and in wintertime, it is a place that unites snowmobilers from across the province and beyond.

Ken Levick is a member of the Porcupine Trail Blasters and the former president of the snowmobile club, which is based in nearby Porcupine Plain. Levick said the Greenwater Lake area is beautiful; sledders have access to 100-plus kilometres of snowmobile trails in the park and can connect to the provincial system of trails as well.

"The resort is open year round," said Levick. "It has a café, store, fuel, cabins and a motel. The closest town is probably Chelan, which is about 16 kilometres away."

Levick said his favourite ride in the area would be starting from Greenwater Lake and riding the Fire Tower Trail heading east. He said this takes you up to Porcupine Plain, where you can fuel up or have lunch. You can then head down the 221A Trail and stop and warm up at the Stromberg Shelter, continuing on to the Pei Wei Shelter and then to Mid Valley Lake. Cross the lake, then take the 221D to loop back through Cougar Canyon and stop at the Timber Wolf Shelter. Levick said it's about a 120-mile round trip.

"On that trip there is a good chance of seeing deer, elk, moose and possibly a timber wolf," said Levick. "The trail is always well groomed and has lots of powder to ride in. You really have a bit of everything—from bush trails (to) rolling fields and lakes. This trail is as scenic as it gets in this area."

The best place to get a map, said Levick, would be on the Saskatchewan Snowmobile Association website or at a nearby community. 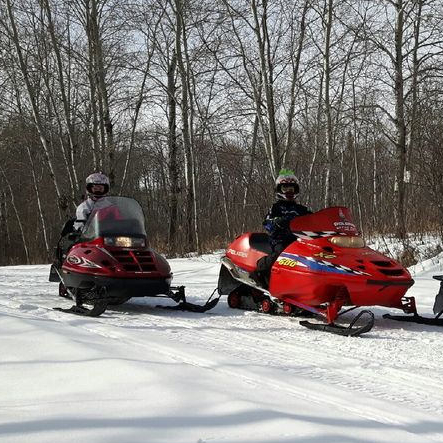 Trail maps, top snowmobile trails, club contacts and other information you can use when planning a snowmobile trip to Kelvington, Saskatchewan. 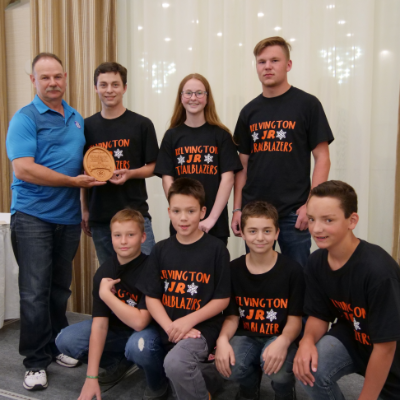 Quintin Hartl, president of the Kelvington Jr Trailblazers, says the club is the future of snowmobiling 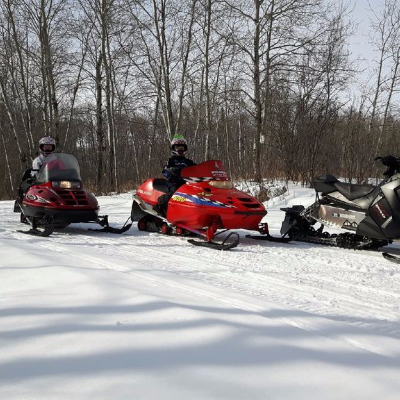 Kelvington, SK Between Greenwater and Porcupine is a trail that’ll leave you feelin’ fine