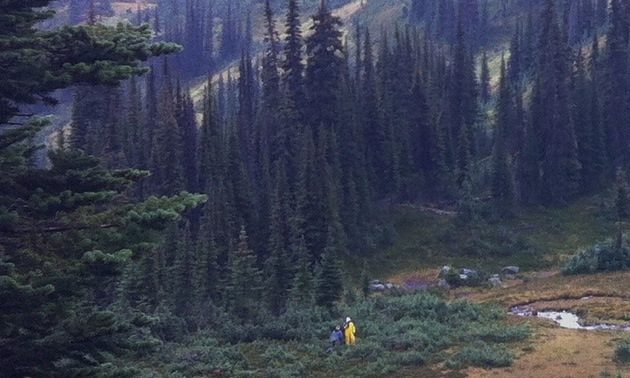 The crew focused on retrieving any stray garbage left behind during the past snowmobile season. Photo by Andrea Robbins

Valemount and Area Recreational Association spearheaded an alpine clean-up in the popular Allen Creek riding area September 21, 2013. VARDA is a non-profit association consisting of local businesses and backcountry users whose goal is to protect and preserve land while educating users.

“It is important to support the areas we ride,” said Chris Gulbrandsen of Parkland Motorsports in Stony Plain, Alberta, who with his wife Andrea made the trek to Valemount to help with the clean-up. “Valemount is like home for me. Epic snowfall and pristine terrain have kept me coming back for the past 20 years.”

There were 34 people focused on cleaning any stray debris left behind, as well as gathering wood and repairing the outhouse. VARDA general manager and key organizer Curtis Pawliuk was pleasantly surprised by the lack of debris found during the clean-up.

“This is very encouraging, “ said Pawliuk. “It seems our message is getting through: Pack out what you pack in.”

Most of VARDA’s efforts are put towards rider education relating to ethical riding, wildlife sensitivity, safety and backcountry stewardship.

Almost all of the volunteers were from Alberta, as Valemount seems to be a favorite riding area for northern Albertans. They all travelled and stayed on their own dime, with the Best Western, Super 8 and Terracana Ranch Resort all offering special rates in appreciation for the group’s efforts. The Best Western even contributed to the evening meal for all the volunteers, with VARDA making up the difference.
Although motorized vehicles are not permitted in the area, VARDA obtained an access permit so its crew could reach out and make a difference. Despite rain and chilly temperatures, the group kept smiling.

They take pride in where they ride, and it was quite clear they plan on cherishing this land for many years to come.