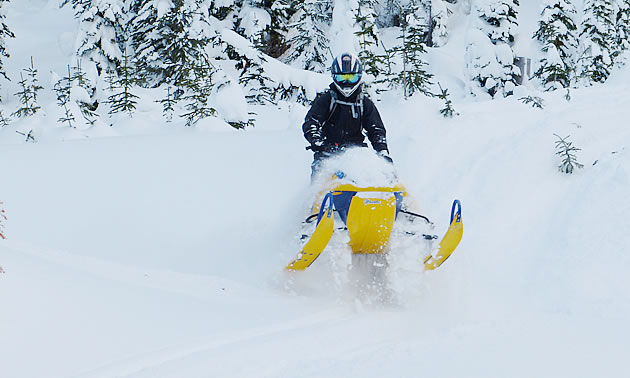 What a treat it was to ride in November. In our area, we don't usually start sledding until around Christmastime. Kirsten Armleder photo

First rides, first tracks, first stucks—November and December bring a lot of firsts. Bottomless snow at this time of year and overjoyed sledders equals lots of stucks, extremely sore muscles and a big grin at the end of the day—so long as both A-arms are still intact when you get back to the truck.

After staring at our sleds in the garage for the last two months, and firing them up at least once a week—which sent us running for the door, coughing and choking on two-stroke smoke—my husband and I decided to go for a casual “trail ride” to try out our new-to-us sleds and see what we could see. To our surprise, we found two and a half feet of fresh snow! It looks like the silly snow dance I did last month might have worked!

The morning of November 25, 2012, began with us digging out gloves, helmets and goggles, plus organizing our avy packs. We had loaded the sleds the day before so once we were ready, we hopped in the truck and headed out—only after making a ceremonial stop at Chevron and Timmies, that is. About 25 minutes later, we were unloading at the parking lot for the Lumberton area, which is just west of Cranbrook, B.C.

With sunny skies overhead, we hopped on our sleds and took off down the main trail. Shortly after my thumb hit the throttle I could feel the butterflies flitting around in my stomach. A slow smile started to spread across my face. Six months with no sledding was far too long for this girl.

We followed some tracks off the main trail until we found another trail that hadn’t been broken in yet. It was all ours! The trail took us to a cutblock where we played around and had to dig each other out several times. Ah, the joys of early-season sledding.

After we had staked our claim on the small play area and worked up a good sweat from wrestling around with our sleds, we decided to follow a different route through the trees. It seemed like a good idea at the time but the decision only led to me getting stuck more times than I can recount and eventually getting buried in some willow bushes.

Now I will tell you what—a woman can only get stuck so many times in a row before exhaustion sets in and turns to frustration, which can lead to an emotional outburst of anger. But it wasn’t long ago that I had read a very informative article on sledding with your spouse and I believe this sentence in the article was directed to the wives: “There is no crying in sledding.” So with that in mind, instead of getting frustrated and cussing my sled out, I decided to hum a tune and enjoy my peaceful surroundings while stamping down the snow under my track and waiting for my husband to realize I was stuck and come back to help me. Lo and behold, it worked and I was smiling again when he returned.

Unfortunately, right after we got my sled out, he got stuck. At this point, we were ready to head home. Part of sledding is knowing when it is time to quit so after digging his sled out, we followed our tracks back to the truck.

Driving home, completely exhausted, hand in hand, the radio tuned in to classic rock, we chatted about our sleds, our gear and the places we want to ride. Needless to say, it was a beautiful prelude to the season, and our short jaunt gave us a glimpse of what is yet to come.

Our season has officially begun and it looks like we aren’t the only ones. Across Western Canada, our two- and four-stroke friends are firing up their machines while snowmobile clubs are having elections and preparing to start grooming their trails.