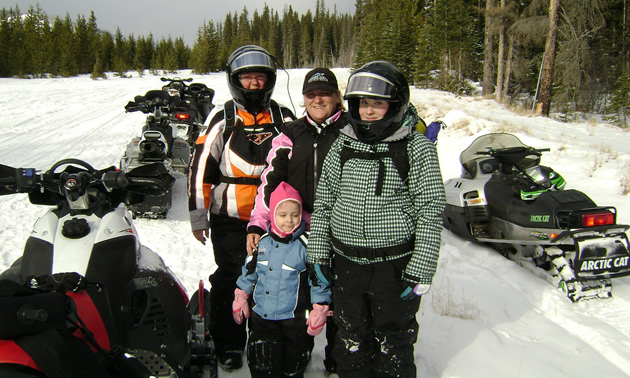 This photo of (clockwise from left) Haven Aitken, Jan Hoffman, Kennedy Brown and Jaymie Hoffman was taken on Satoris Road, which is south of Blairmore, Alberta, while they were on a family sledding trip. photo courtesy Jan Hoffman

Jan Hoffman is a stay-at-home mother who never stays at home—when it comes to snowmobiling, that is. Jan, 44, lives in Medicine Hat, Alberta; she is a mother of five kids and she believes that sledding brings her family together in a way that nothing else can.

Jan’s husband, Larry Hoffman, got Jan into snowmobiling when they met 10 years ago, and they introduced Jan’s 17-year-old daughter, Kennedy Brown, to the sport when she was nine years old. Kennedy started out riding a Ski-Doo Summit 600 and now she rides either the family’s Arctic Cat Powder Special or their 2008 Arctic Cat M6. When Jan’s youngest daughter, Jaymie, came into the world, the couple bought a child carrier backpack and took Jaymie on her first snowmobile ride when she was six months old. Jan said that she loved it.

“When she was six months, she would mostly sleep,” said Jan. “And the next winter, when she was 18 months old, she would hum along and sing and sometimes she would beat on the back of Larry’s helmet and squeal.”

When Jaymie got older, she graduated to a child riding belt, and Jaymie’s younger brother, Trennis, started riding in the backpack. Jan had a special seat and foot supports built for her sled to accommodate the child riding belt.

Jaymie, now seven years old, rides her own sled these days. It is a fan-cooled 340 Polaris Indy Lite with a throttle block on it to prevent Jaymie from riding too fast.

Another rider joins the group

The Hoffmans ride together at Cypress Hills, Saskatchewan, and they make several trips each season to the Crowsnest Pass, Alberta. Four years ago, Jan invited her mother, Haven Aitken, to go snowmobiling in the Crowsnest Pass with them—but Jan never anticipated what would transpire as a result.

After going on just a few rides, Haven—who was 58 years old at the time—was hooked. She went out and bought a 2008 Yamaha Phazer MTX and has been riding with Jan and Larry ever since. In December 2011, she upgraded to a 2011 Nytro Black from Skinz Protective Gear in Paynesville, Minnesota. According to Jan, the Nytro Black is a special-concept sled; currently, there are only two of these sleds in Canada—Haven owns one and Jan owns the other.

Improving the experience for all

Having been introduced to snowmobiling by her husband and sharing it with her mother and kids has taught Jan that part of what makes a good first experience is having the proper gear. That concept laid the foundation for Jan and Larry’s business, Trax 2 Treadz.

“We had been taking the kids to the mountains for a long time and we really had to search to find the child riding belts and the different things that we used when we were in the mountains to make our lives easier,” said Jan. “We knew how hard we had to search to find them, so we thought, ‘Why not bring them to the Canadian marketplace and make them more readily available for other families?’ ”

Based out of Jan and Larry’s home, Trax 2 Treadz offers innovative ATV and snowmobile products and accessories. According to Jan, a large portion of their clientele are mountain riders, and she said that air-frame running boards are currently one of the company’s fastest selling products.

Jan has many fond memories of snowmobiling together with her family, but there is one ride that stands out in her mind.

“It was getting towards the evening and we were coming down off a logging road,” said Jan. “All of the kids were there and my mom and I usually ride sweeper—so I ride last and Larry rides first—and it was so neat to stop and watch the sleds go down the mountains, through the switchbacks in the calm and know that’s my family, and that we are safe and are together and that nothing can take this away from us. Everything in that moment in our world was good—it was perfect.

“To be able to share (the sport) with my mom, my daughters and my sons, it’s just incredible. It brings us together in a way that nothing else can.”

Haven Aitken, 62, is from Viscount, Saskatchewan, and she started snowmobiling four years ago. Aitken said that being a sledder helps her to stay active and healthy. In 2009, she started ATVing to keep in shape during the summer months. Aitken spends her winters going sledding with her daughter, Jan Hoffman, her son-in-law Larry Hoffman, and her grandchildren. In the summer, she enjoys ATVing with her husband, Dwayne. RidersWest spoke to Aitken about her passion for motorsports.

What do you enjoy about going snowmobiling and ATVing? The motive for me is to stay healthy. It keeps me motivated to enjoy life. I can really enjoy life because I am doing things with my family. Sometimes we do things for the very first time and you are there to witness other people’s triumphs—and when you push yourself out of the box and succeed, they are there to enjoy your triumph. We laugh a lot and we are there to help each other.

As for ATVing, if one us happens to get stuck out with an ATV, then we have to work together as a team. I’m thinking of this winter when (my husband) got stuck in the snow and we put in a couple of hours of shovelling and winching, and you really have to learn patience. We got back to the house about two or three hours late and it was dark and he said, "huh, wasn’t that fun?" I said, "yeah," because I have to remember all of the times that I have gotten stuck on the sled and people have shovelled me out, and I just had to bite my tongue and say, "oh yeah."