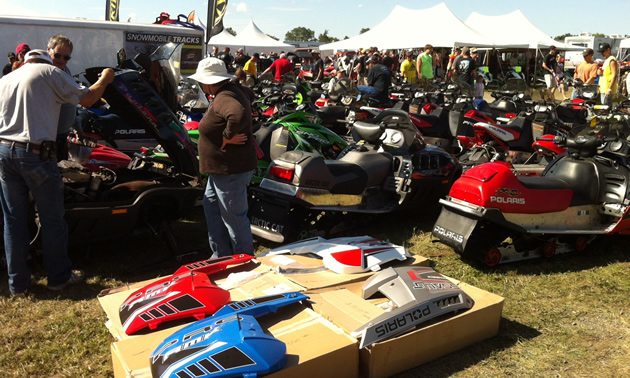 If you are looking for a specific part or snowmobile, this is the place to find it. submitted photo

An empty field in North Branch, Minnesota, is an unlikely spot for the largest snowmobile event in the world. But each year, under the sweltering heat of early September, it is transformed into a sprawling extravaganza of snowmobiles and loyal fans of the sport. All the major sled and ATV manufacturers, plus aftermarket product companies, are there to showcase new technologies.

Hay Days 2014 was no exception. This year, upwards of 30,000 people probably walked through the gates. If each of them got to see even half of the things at this year’s event, they were doing well.

It used to be that the grass drags were the biggest draw at Hay Days, but now it seems the focus is more on the vendors and swap area. Spread out over 12 hectares (30 acres), the swap area features everything from snowmobiles, ATVs and dirt bikes to boat engines and aftermarket parts.

Then, in the middle of all this madness is a dirt track where guys on ATVs, dirt bikes and snowmobiles perform daily freestyle shows. Also held at the track are Terracross, or side-by-side, races.

With so much to see, it’s impossible to take it all in over the course of one day! Hats off, once again, to the Sno Barons Snowmobile Club and the other local snowmobile clubs who were involved in the organizing of this spectacular event.

The date has already been set for the 49th annual Hay Days: September 12 and 13, 2015. Watch the Sno Barons Snowmobile Club’s website for updates.