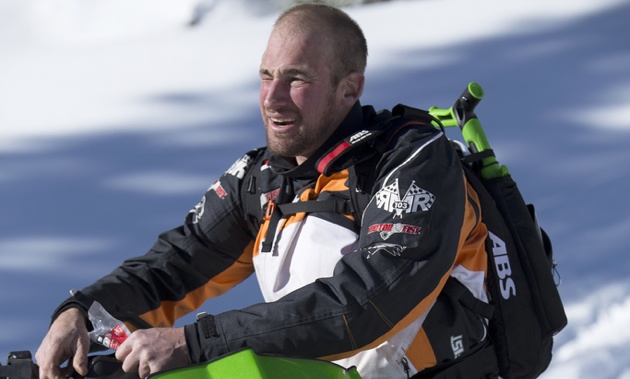 photo courtesy Motorfist LLC Humble and with back to basics values, Team Arctic Cat racer Rob Kincaid rides as much as he possibly can.

Glitz, glamour and pizazz are all characteristics of super stardom—unless you are Rob Kincaid. Some consider this Arctic Cat backcountry rider and Team Arctic Cat RMSHA racer to be one of the biggest influences in today’s sled world. Kincaid, however, sees himself as an Average Joe. A building contractor and loving father of two, Kincaid spends his time balancing his unquenchable passion for riding with his work and family.

“My wife Kimberly is my biggest supporter," said Kincaid. "I am truly blessed to have a wife so understanding of my passion for riding.”

Kincaid tries to spend at least one day per week riding with his family. His son Riley is like a chip off the old block, even at the age of 12 mirroring his dad's passion for backcountry riding. Daughter Shelby, 16, isn’t quite as smitten, but loves sports and the great outdoors just like her father.

The rise to stardom

How did Kincaid get to the status of super star? Hard work. He rides for the sheer joy of riding, living and breathing fresh powder, and the incredible mental and physical challenges riding brings.

As he pursued his racing career on the RMSHA circuit, Kincaid was eventually spotted by someone of influence with Arctic Cat who realized he wasn’t racing to be a somebody, he was racing because he loved it. And after 18 years of racing and 20 years of riding, his love for snowmobiling has not waned. If anything his passion has been fuelled even more by those who believe in him. Like race gas on a fire, Kincaid has an incredible list of sponsors and supporters who are are just as excited as he is to see their products rock it in the real world of riding with Rob Kincaid.

When we think of sponsored riders, integrity is always a question. But integrity is how Kincaid rolls. Speaking with him puts a picture of a back-to-basics Wyoming cowboy in your mind, one who believes honour is everything and a man's word and his handshake are like gold. Before Kincaid works with any business on a professional level, he must first believe in the product and know for certain it is the best for his ride style.

Kincaid had the opportunity to build his dream machine this season. With ample momentum and support behind him, he wanted to build what he thought would be the best mountain sled on the planet.

He started off utilizing the 2014 Arctic Cat Proclimb 8000 Limited Edition chassis. Next he replaced all of the stock plastics on the machine, clutch cover and tunnel with carbon fibre from Patrick Custom Carbon, making the machine incredibly light. Suspension-wise, he replaced the stock set up with the Fox Float 3 Kashima upgrade kit. An upgrade of front and rear bumpers along with a skid plate was a necessity. Racewerx was his choice, the brand that also manufactures the new style of running boards he’s using.

Rox handlebar risers helped him to roll his bars two inches forward—just enough to give him better positioning in relationship to his steering post. The result is far more control, especially in steep off-camber situations where you absolutely do not want to lose your line. More control, better geometry and dispersal of rider weight does make sense.

Track wise, Kincaid is joining the guys who don’t think bigger is better. He's rocking a three-inch 156.3 Camoplast track, which gives him epic flotation and bite, making him ready for more ponies beneath his seat. Which leads me to the most exciting part of this build story.  Kincaid's starting line Powderpro skis, avid product drivers and toyskinz wrap are the icing on the cake for this build, creating any riders dream machine.

“Leave it with me and let me try to break it,” Kincaid said to Speedwerx supercharger manufacturers when they approached him about using their product. Again, Kincaid will not use something unless he fully believes in it, so try to break it he did—to the tune of 500 miles of backcountry bashing.

This awesome set-up relies upon pulleys rather than exhaust gases to boost the system. The result is predictability and unreal bottom end torque. Kincaid's Speedwerx Supercharger is set to run eight pounds of boost, giving him roughly 225 horse. Along with the gain in horsepower, Kincaid gains confidence to hit even more incredible lines above cliffs and wicked terrain, as he knows the power will be there instantly when he needs it. Re-entries become cake, and if  a rider wants to rock a wheelie he simply leans back, smacks the fun flipper and the skis are high in the sky.

I almost keeled over when we talked fuel. Yup, not even kidding, this wicked machine runs on 91 octane pump gas. Not only is this economical, it creates another easy button as you don't have to hunt for higher octane fuel.

Catch up to Kincaid on Motorfist’s facebook page or on his facebook page, where you’ll see Kincaid along with his partner in crime David McClure.