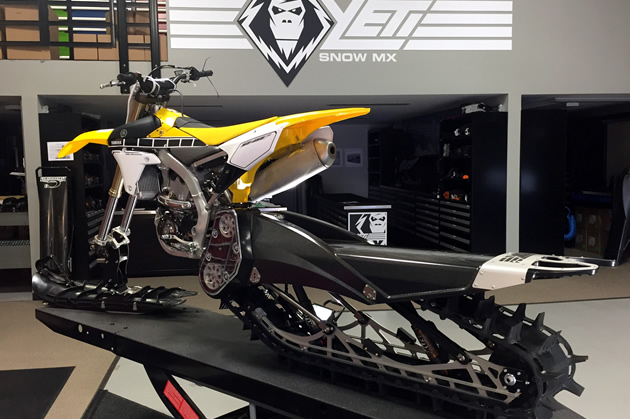 The Yeti Snow MX is a simple, bolt-on kit that converts any regular dirt bike into a snow bike. It’s been tested on a variety of bikes, from KTM 200 two-strokes to this Yamaha YZ450F. photo courtesy C3 PowerSports

Rumours of a Canadian-made-and-manufactured snow bike kit have been spreading like wildfire, and for once, they are true. After 29 months of secret testing and tuning, the Yeti Snow MX goes into production this fall.

Lighter than its main competitor by about 35 pounds, the Yeti Snow MX features a carbon fibre chassis, titanium components and a purpose-built ski and track. It is the brainchild of Jamie Hodgson and Kevin Forsythe of C3 PowerSports and this is how their idea to produce an OEM quality kit came to fruition. 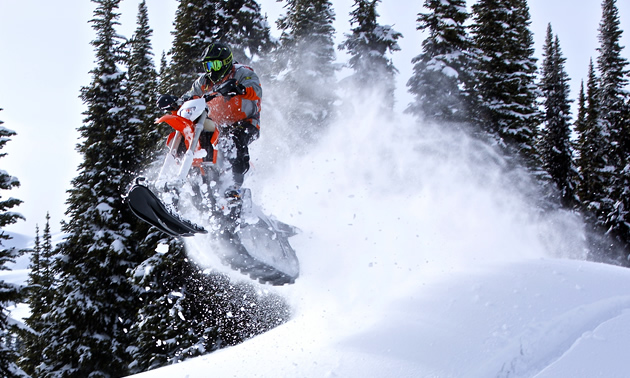 Two years after swapping his snowmobile for a snow bike, Hodgson—who is from St. Albert, Alberta—approached Forsythe (the owner of C3 PowerSports) to build a snow bike kit that was lighter and more efficient than what was currently on the market.

Forsythe agreed, and the first generation Yeti was completed in the fall of 2013. Meanwhile, Hodgson noticed that snow bikers were starting to run turbos on their bikes to up the fun factor. After a winter on the Yeti, he and Forsythe decided to partner and take their creation to the next level.

"So we said, 'Let's make a kit that's lighter and uses less horsepower so that a turbo is not required to climb straight up a hill,' " said Hodgson.

They reworked the original design and with the help of Scott Johnson of Imagination Machine Works built the second generation Yeti.

“He is Roger Goldammer’s CAD designer and Roger is one of the top bike builders in the world,” said Hodgson. “So Scott really understands bike geometry and bike frames.” 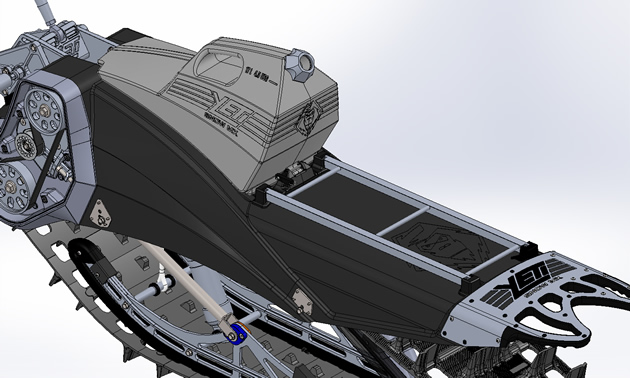 Computer-aided designs (CAD) have allowed Hodgson and Forsythe to perfect the design of the Yeti. Here is how the Yeti’s integrated fuel tank and cargo rack, which will be available in November, will look like. The tank does not touch the carbon fibre chassis and it is easy to remove. The tank is also mounted at the front of the tunnel to eliminate weight on the tail. image courtesy C3 PowerSports

But there were still a few things that needed to be perfected, so they moved onto the third generation and that is when things really started to come together.

Shaving unnecessary weight off the track, they came up with a design that moves more snow and has less rotating mass than tracks found on other kits. This equates to better flotation and higher RPMs—which also means riders on the Yeti can shift into higher gears when climbing.

The MaxTrak works in conjunction with the MaxKeel ski for better handling.

“We designed both the ski and the track around a 20-inch arc and what that means is when you drive the kit it feels like you are driving a motorcycle,” said Hodgson. 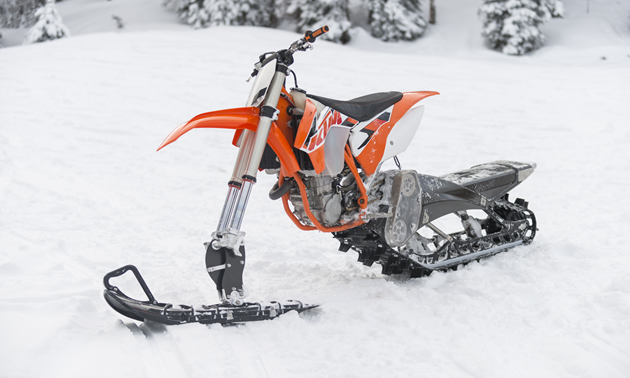 The Yeti is easy to handle in the deep snow and on the trail, thanks to its lightweight design and snow bike-specific ski and track. photo courtesy C3 PowerSports

Handling on the trail and in the deep snow is also made better thanks to the aerospace-grade carbon fibre chassis mated with a Nextech-designed rear suspension, Ice Age Performance slide rails and Fox Float 3 shocks.

The Yeti takes advantage of C3’s Syncrodrive belt drive system, which, according to Hodgson, gets more power to the ground faster than a chain drive.

“A belt drive is 40 per cent more efficient from 0 to ⅓ throttle,” said Hodgson. “It's really efficient off the bottom—it takes less energy to get rolling.” 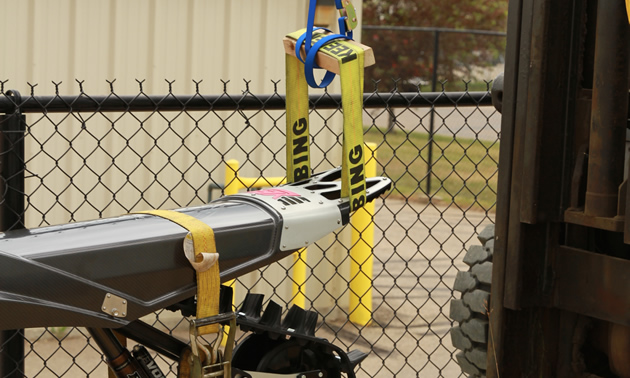 Carbon fibre is seven times lighter than steel and just as strong. Here, Jamie Hodgson is using a forklift to test the strength of the Yeti’s carbon fibre chassis and rear bumper. “This test can be repeated for many many cycles,” he said. “Carbon fibre has no fatigue and returns to shape each time.” photo courtesy C3 PowerSports

Reliability is a non-issue with the Yeti, and Hodgson has proof that it will stand up to any kind of abuse riders can throw at it.

“Going onto the fourth generation, we had over 40 kits on 40 different bikes with 40 different riding styles starting in November and riding all last winter,” he said. “We’ve tested it on frozen rivers and lakes. I’ve ridden it through the stubble fields and the plowed fields with basically no snow on it and lots of mountain riding.” 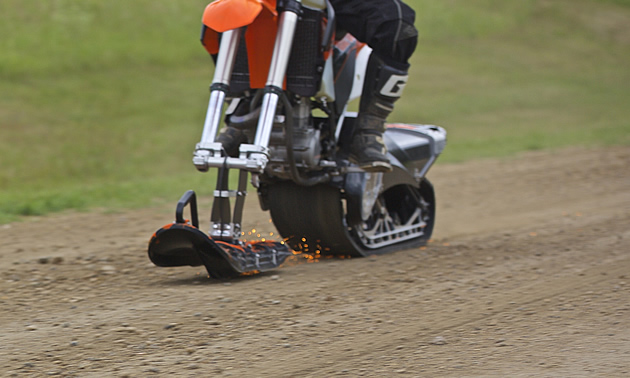 The Yeti has been tested in just about every kind of terrain, even gravel. This test was performed to determine the best ski skag to run on the Yeti. photo courtesy C3 PowerSports

The Yeti has even been to Alaska with pro mountain biker and sledder Cory Derpak.

“He’s been testing it and we’ve tweaked a few parts based on his 30- to 60-foot drops,” said Hodgson.

What you’ll see roaming the backcountry this winter is the result of two and a half years of testing and collaborating with the top manufacturers in the industry to create what Hodgson calls “the ultimate snow bike kit.” 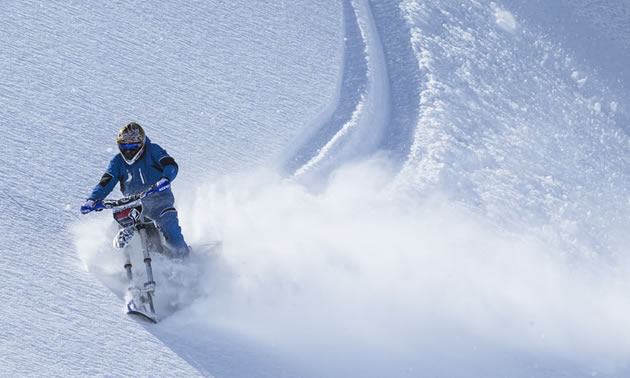