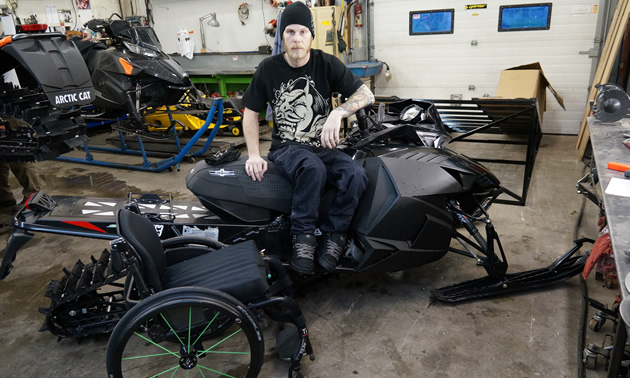 Life has definitely thrown Erin McBrearty a curve ball, but positive thinking and the willpower to move ahead—no matter what the circumstances may be—have kept him going. Sheldon Kelly photo

Originally from Elliot Lake, Ontario, Erin McBrearty—who is now 30—grew up riding snowmobiles, dirt bikes and pretty much anything that had a motor. Years later, he and his wife, Holly, moved to Cranbrook, British Columbia, to be closer to their family and friends. Soon after the move, McBrearty bought a mountain sled and was out riding every chance he had.

But on April 21, 2012, McBrearty’s life came crashing down. While sledding at Chatter Creek near Golden, B.C., McBrearty made a split-second decision to drop off a windlip and it led to disaster.

“I landed flat and where I landed was really icy,” he said. “Basically, the suspension buckled and bottomed out. My knees gave way and my butt hit the seat. It all happened at the same time and I compressed my L1 vertebra quite bad.”

McBrearty was airlifted to the hospital in Golden and then transferred to the Foothills Medical Centre in Calgary, Alberta, where he was later given a 10 per cent chance of walking again.

Never one to dwell on the past or feel sorry for himself, McBrearty immediately started thinking about how he could get back on his sled. In the hospital, he spent every waking moment on the Internet, networking with other paraplegics who have been able to keep doing the sports they love.

After three weeks in intensive care, McBrearty was transferred to a rehabilitation unit at Foothills, where he was enrolled in occupational, physical and recreational therapy. Driven to succeed, McBrearty aced every skills test he was given, sometimes leaving the therapists wondering what to do next.

“I was supposed to be working on my transfer from a wheelchair to a couch,” he said, “but because I had so much upper body strength, we were working on uneven transfers—getting me from the floor back into my chair just using my arms.”

Before he was even released from the hospital, McBrearty was back to driving his truck again, with a hand-control system. His rapid progress led to an early release.

When he got home, McBrearty continued to push himself. Swimming, lifting weights and gaining access to the paralympic training centre in nearby Kimberley, B.C., McBrearty was able to gain some feeling back in his legs.

“My one leg is farther along than my other leg,” he said. “I can move them both but just with my thigh muscle.”

McBrearty soon decided it was time to get back on his sled, and with the support of his wife and some good friends, he was tearing up the trails in no time at all.

“I knew after the first corner that it wasn’t going to be too big of a deal,” he said.

After a few rides, McBrearty was even venturing off-trail to climb and carve. He’s had to rethink his riding techniques though.

“I figured out pretty quickly that if you lean into the high side of your carve, you’re not going to tip over but the sled’s still going to carve,” he said. "I know what I have to do, it’s just trying to get my body and the machine to do it again in a different manner.”

Giving up the sport of snowmobiling was never an option for McBrearty.

“There’s no way I could stay off my sled,” he said, “just because I grew up sledding and I love it so much.”

McBrearty is looking forward to this winter and getting back to the style of riding he loves the most.

“I want to get good enough to the point where I can go back into the trees and carve,” he said.

Since the accident, McBrearty is back to enjoying many of the activities he loves—snowmobiling as well as downhill skiing, hunting and ATVing.

“I decided in the hospital that I was just going to move forward and whatever happens happens and make the best of it,” he said. “I’m definitely going to miss some parts of my other life—like riding bikes and skateboarding, but there are other things I can do now that I wouldn’t have been able to do before.”

McBrearty is thankful for his wife and all the support they have received from the community of Cranbrook and from their friends back home in Ontario.

He hopes to walk again one day.

“What I’ve been told is anything is possible,” he said. “It’s just how much effort and commitment you want to put into doing it.”