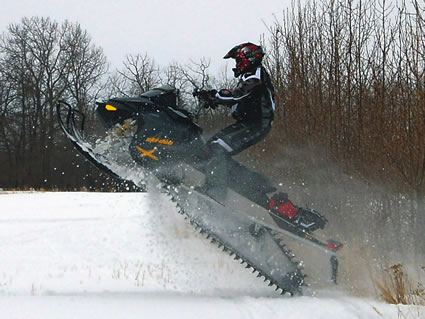 Jason Yacey’s sled resembles a rearing thoroughbred as he gallops along the Iron Horse Trail near Vilna. photo by Darryl Yacey

The Iron Horse Trail is a favourite of many snowmobile clubs in Alberta’s Lakeland region, only an hour’s drive from Edmonton. With 300 kilometres of trail to access, avid riders can spend several days on the trail exploring.

The multi-use trail is built up from an abandoned Canadian National Railway (CNR) line that stretches from town to town. The southern spur runs from Heinsburg north through Elk Point and St. Paul, Glendon, Bonnyville, and ending up in Cold Lake. The western spur at Abilene Junction travels through Vilna and onto Smoky Lake, which is considered the western gateway to the Iron Horse Trail.

The trail takes users through a multitude of environments: aspen parkland, boreal forest, farmland, and small villages and towns. All are cozied around the rivers, streams, ponds and lakes that Alberta’s Lakeland is named after. Throughout a trek on the Iron Horse Trail, one could encounter coyote, deer, moose, bear (typically the smaller black bear, but never take it for granted), lynx, wolf, weasel and snowshoe hare, as well as literally hundreds of species of birds. This assortment of wildlife creates a nature lover’s paradise.

Marianne Price, administrative co-ordinator for the Iron Horse Trail, jumped on our 20th anniversary theme right away, noting the coincidence with the CNR’s announced abandonment in 1989. Centralization and cost-cutting measures by the rail giant caused closures of grain elevators throughout the Prairies in the last quarter century. With no functioning elevators to visit, trains rolled through many towns without stopping. After a while, however, even the trains stopped rolling.

But rather than focusing on the negative side of the situation, people in the region saw opportunity.

“Nothing ever happens right away,” said Price.

Price explained that in 1989, North-East Muni-Corr and the Riverland Recreational Trail Society formed and were instrumental in fleshing out the plans for the Iron Horse Trail. Over the next several years, these not-for-profit organizations worked to make the trail a reality. Fuelled by the efforts of these organizations and hard-working volunteers, the Iron Horse Trail officially opened on June 8, 2003.

“In 2005, Trans Canada Trail rewarded Iron Horse Trail and linked us into the system,” said Price. “It was really the icing on the cake.”

The Trans Canada Trail portion is the segment that runs from Heinsburg northwest to Abilene Junction, and then west to Weskatenau.

The Trans-Canadian Snowmobile Trail also incorporated large portions of the Iron Horse Trail into its map in 2005.

Now, 20 years after the CNR abandonment, some of the individual clubs along the way are enhancing local trails with exciting projects in their region. Clubs from Smoky Lake, Bonnyville and St. Paul are working towards new trails to vitalize their neck of the woods.

As an example, Smoky Lake is planning an intriguing addition for its trail network.

“Two looping systems, adding about 200 miles (320 kilometres) of groomed and marked trails, are in the works this winter,” said Vern Billey, president of the Smoky Lake Trail Twisters snowmobile club.

With the Trans Canada Trail portion of the Iron Horse Trail acting as the backbone, the new trails will take riders north and east of Smoky Lake as far as Whitefish Lake. The addition will give enthusiasts who wish to make long, continuous treks a place to ride, complete with supply and refuelling options.

“The contractors will be breaking ground in two to three weeks’ time,” said Billey, adding that the multi-use trails will be completed by March 2010.

It is hoped that the add-ons in the other communities will be ready soon as well. 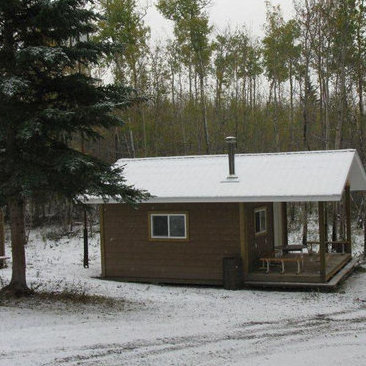 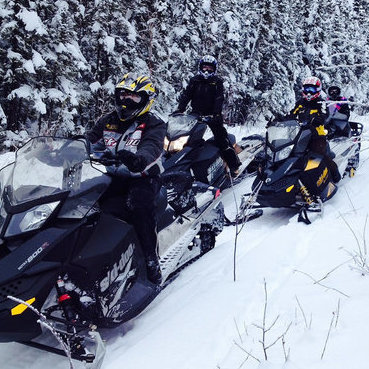