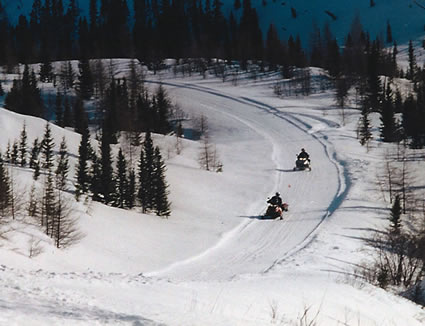 Jim and Melissa Jamison live in Perkiomenville, Pennsylvania, and they have been snowmobiling together for a very long time. In 1963, their favourite place to sled was the Poconos in northeastern Pennsylvania—a mountainous region that is popular for its recreational offerings.

The couple purchased a home there and continued to visit the area each winter for great sledding, but they soon moved on to the Adirondack Mountains in the northeastern part of New York. They bought a home there as well and enjoyed great snow conditions for more than 20 years. Adventurous spirits like to move on, however, and the Jamisons have moved on to Canada. Thirty-one years later, the Jamisons haven’t strayed. They come up to Canada each winter to snowmobile.

The couple usually stay in the eastern provinces of Canada, but they have been as far west as Manitoba and have ridden through Ontario numerous times. Eighteen years ago, Jim was asked to look after a few snowmobilers who wanted to ride to Canada, as he had more experience with the region. He agreed and everyone loved it. Soon after, Jim discovered that there was a market for American snowmobilers travelling up into Canada, and Jamison Canadian Snow Excursions was born. In the earlier years, Jim took groups of people on tours to Labrador—a trip that usually took three weeks if they didn’t get stuck in a blizzard. Typically, they put about 5,000 kilometres on each sled. These excursions catered to those who wanted to see the spectacular backcountry of Canada’s eastern provinces, including Quebec, New Brunswick, Newfoundland and Labra-dor—Jim’s personal all-time favourite place to sled.

“It is spectacular,” he said. “Of all the snowmobile tours and places that I’ve been, (Labrador) is absolutely (the most) astounding. It is nature’s beauty at its best and it has awesome country.”

The couple that sleds together

More recently, Jim has taken a step back from his tour groups and goes on only three work trips per year. A tour with his company includes everything from lodging and meals to maps and destinations—all you need is a sled. A typical trip would take sledders through Quebec and New Brunswick, and would last for one week.
One of Jim’s reasons for going on fewer work trips is that he wants to concentrate on travelling more with his wife.

“Every year we do trips together,” said Jim. “We take one week after Christmas and one week after Thanksgiving. Then, when I am done with my tours, my wife comes up for three weeks with me at the end of the season—next year is Quebec . . . and the Abitibi Canyon in Ontario.”