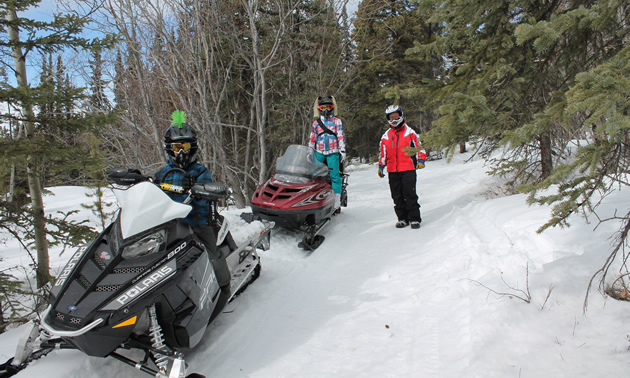 Here, Mark Daniels, who is the president of the Klondike Snowmobile Association, enjoys some springtime sledding with the family. photo courtesy Mark Daniels

A new bylaw in Yukon’s capital city led to some unhappy snowmobilers, according to the Klondike Snowmobile Association (KSA).

The new bylaw, which became effective January 5, 2013, requires snowmobilers to obtain a Safe Snowmobiler card in order to ride within city limits. To get the card, they must complete an online safety test. In addition, the operator must be at least 16 years of age, carry a valid driver’s licence and have liability insurance and registration on their sled. Helmets are mandatory as well.

The bylaw was introduced to enhance rider safety but Mark Daniels, president of the KSA, said that as a result, attendance at the association’s annual charity poker run went down and that fewer riders used the local trail system.

“We hosted our Annual Charity Poker Run and donated $1,400 to Big Brothers/Big Sisters Yukon,” said Daniels. “Attendance was sharply reduced with the introduction of a new municipal snowmobiling bylaw. Normally, the event would have been much larger and we would have donated more.”

The Annual Charity Poker Run is a way for the KSA to give back to the community. This winter, the KSA also organized its annual Family Ice Fishing Day and a 60-kilometre group ride from Whitehorse to Braeburn on the historic Dawson Overland Trail.

Snowmobiling is a popular form of recreation for people living in urban areas like Whitehorse and Dawson City and, in the rural communities of Yukon, it is a way of life. Daniels said that most Yukon homes have at least one snowmobile in their backyard.

It’s difficult to say how many total snowmobilers there are in Yukon since few of them actually belong to a club but the KSA does know that there are 900 registered snowmobiles in the territory.

The KSA grooms approximately 500 kilometres of trails around Whitehorse with Mogul Master drags and all of the work is done by volunteers. KSA members also groom some non-motorized trails for the local municipality.

From lakes and rivers to mountains, seasonal roads and narrow trails, Daniels said the riding opportunities in Yukon are almost limitless.

“User density is minimal so you can ride all day, even near Whitehorse, and hardly see another person . . . ,” said Daniels. “Properly licensed, registered and insured, you can drive on the roads from your home to the trail network so there’s no need to trailer unless you want to.”

Daniels has been the president of the KSA for about eight years and he’s been a snowmobiler for longer than he can remember. He said the Copper Haul Road is the backbone of the local trail system and it is the main trunk of the Trans Canada Trail in Whitehorse. From the Copper Haul Road, riders can access the backcountry via secondary routes.

This summer, the KSA will be working on a trail system through the Klondike gold fields that will connect Dawson City to the Trans Canada Trail.

For more information about the KSA and Yukon snowmobile trails, see the KSA’s website.

Whitehorse, YK Natalie of the North

Ten-year-old Natalie Daniels and her family—her dad, Mark; her mom, Nita; and her brother, Zane—live in Whitehorse, Yukon, where sledding is taken very seriously.