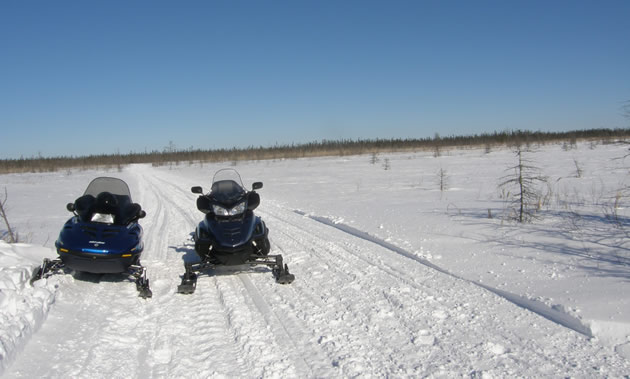 A couple of sleds take a break on the swamp trail south of Pinawa to Whitemouth. Photo courtesy Gus Wruck

Many wonderful sledding memories have come out of the Pinawa region of Manitoba. It’s no surprise given the popularity of Eastern Manitoba as a snowmobile destination for the province’s dedicated riders.

Mac Pellow, director of the Pinawa region with the Eastman SnoPals, first started sledding in Pinawa in 1972 and he owns plenty of those great sledding memories. Most memorable, for him, have been extensive trips where a handful of couples would hit the trails and travel all the way down into the United States—no trailer involved.

“You walk out your back door with whatever you’re going to take, you strap it on your sled and you just keep going from motel to motel until you’ve done what you wanted to do,” said Pellow. “Those trips had everything because you would get probably five of your best buddies and their wives, so it was social. Going into the States you get into a different kind of land and territory, so there was all of that combined. Sometimes we kind of had to push things to get to the next town where we wanted to stay overnight. Other days we could take our time and enjoy the scenery.”

Manitoba has an exceptional network of interconnecting trails. From town, riders can cross the Pinawa channel on a diversion dam and link into another club’s trail network to the northwest. Lac du Bonnet is easy to reach and Whiteshell Provincial Park is across the Winnipeg River, generally accessed by carefully crossing the Seven Sisters hydro dam. Pinawa sits in the middle of a number of trail link-ups and almost any destination is in the reach of an ambitious sledder.

Pinawa is ready for riders. Pellow said the club's groomers are conditioned and ready to go before the snow flies. Through the season, he can be found giving back to the sledding community by combining the enjoyment of a ride with trail maintenance and upkeep. There is certainly plenty of trail to explore in Pinawa.

“It really is quite diverse in this area,” said Pellow. “You’re very close to farm areas so you’re riding either through fields or around fields. It’s in the edge of the forest so you get a lot of bush trail and, of course, there’s what’s called the Whitemouth Bog, which is a very unique area. It’s on preservation right now and our trail goes right along the edge of it. It’s almost like a moonscape out there—it’s really weird.”

Name: Mac Pellow
Age: 68
Occupation: Retired
Sledding since: 1972
First sled: 1972 Roll-O-Flex
Current sled: 2003 Arctic Cat
What did you like about your sled? I have a Pantera, which is a two-up machine and it’s a 600 with EFI. I like the EFI stuff and, again, it’s bought because of comfort. It’s still a nice comfortable machine—it’s just not a speedy machine anymore and I’m not really interested in that anymore.
What is your favourite riding area? We usually cover all of it during a season. To really pick just one area—I probably go up a lot to the Northeast part out of Pinawa to a place called Kings Kookout, which is where we have one of our cabins.
What is it that keeps you coming back, year after year? I just love it. I just love being out with the wind blowing past me. I mean, I like motorcycles, I like boats, I like that feeling of that motion and the wind going by me. I don’t know what it is—I just love it.