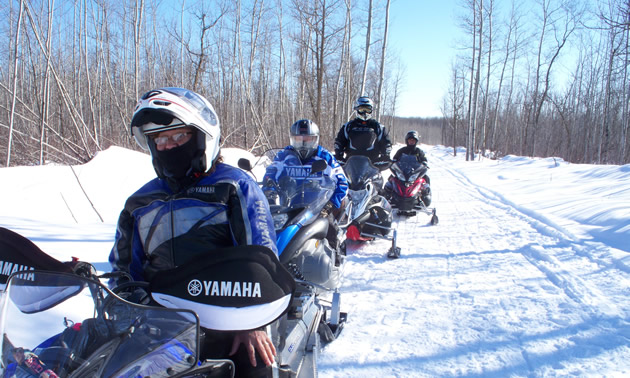 Club members stop to enjoy the view at the top of Durston Hill on the Riding Mountain Trail. Sylvain Paquet photo.

Dauphin is a sledder's dream. This friendly community in southwestern Manitoba is situated in the heart of the province's spectacular scenic region known as the Parkland. It is also nestled perfectly between two amazing parks: Riding Mountain National Park to the south and Duck Mountain Provincial Park to the north. It is also flanked by two large freshwater lakes, Lake Manitoba and Lake Winnipegosis.

What does this mean for snowmobilers? A lot! This area offers endless opportunities for riding and gets a ton of snow every year.

Sylvain Paquet is the president of the Dauphin & District Snowmobile Club.

"Our location is just amazing," said Paquet. "Dauphin is the centre of the Parkland and is a great place to stage and snowmobile from. All the trails in the area connect right from here. You can find everything from flatlands and rail beds to lots of hills and snow. There is always more snow at Riding Mountain National Park and the view from the top of Riding Mountain is amazing. You can see almost all the way to Dauphin."

Riding Mountain usually gets six inches of snow for every inch in Dauphin. Although sledders aren't allowed inside park boundaries, the Dauphin & District Snowmobile Club's trails go all around the northern park boundary, offering amazing views, trails and snow.

There is a big snowmobiling community here. Last year, the club had over 100 members. They changed the club's name from just the Dauphin Snowmobile Club to include the district, since they have members as far north as Pine River. They actually move their meetings around the region to Ethelbert, Sifton, Winnipegosis and others so members don't have to travel as far for meetings.

SnoRiders sat down with Paquet to find out his two favourite riding areas in this incredible Manitoba destination.

"You'll see an abundance of wildlife here," said Paquet. "We get lots of deer, elk, coyotes, foxes, prairie chickens; and near the park boundary sometimes you can spot a timber wolf. As you're riding this trail you get into the hills, where you're going up and down and around curves. Before you head back, again you have to stop on top of Riding Mountain. Depending on visibility, you can see all the way to Dauphin and it's just gorgeous. We are thinking of putting a shelter here so people can stay and enjoy the view."

If sledders have had enough after enjoying the view, they can head north back up to Dauphin. This route from Dauphin is about 80 kilometres. If you want to keep going, you can continue to Keld by following the park boundary. Keld is located down in the valley and here lies a beautiful shelter with wood, an outhouse, stove and some cooking utensils. This route from Dauphin through Keld and back up to Dauphin is about 130 to 140 kilometres and is also one of Paquet's favourites.

Dauphin to Winnipegosis and Ethelbert

Another favourite ride of Paquet's is north of Dauphin. This is a new trail that opened last winter. You depart Dauphin from the north and head out, mostly on farmers' fields. You then connect to the old rail bed, which is a straight line that is groomed regularly. This trail will take you to the small community of Sifton. There is a fork in the road here. Paquet suggest you turn right and head towards Fork River. When you get to Fork River, you go into the ditch on the trail all the way to Winnipegosis.

"There are restaurants, gas bars and hotels here, so you can stay overnight if you choose," said Paquet. "Then you can get back on the trail and head to Ethelbert, where there is a shelter you can stop at. Ethelbert also offers restaurants and a gas bar. You then head back towards Sifton. The loop is about 140 kilometres, so it's a good ride."

Between Winnipegosis and Ethelbert is lots of bush riding and nice zigzag trails. Closer to Ethelbert there are more open fields and lots of deer and elk.

"What I like most about sledding is the community involvement," said Paquet. "I love meeting people from all over. It's also a great way to not be stuck inside all winter. If you're an outdoor person, this is the best way to see areas you would never see if you didn't snowmobile."

To ride trails in Manitoba, you need a SnoPass from Snoman (Snowmobilers of Manitoba). You can either purchase an annual pass or buy a seven-day SnoPass. You can purchase these at any Manitoba Public Insurance (MPI) agent in the province. The other option is to become a member of the Dauphin & District Snowmobile Club for $20 and you automatically become a Snoman member.

Maps can be downloaded off the Snoman website or can be found at the dealerships in the area.