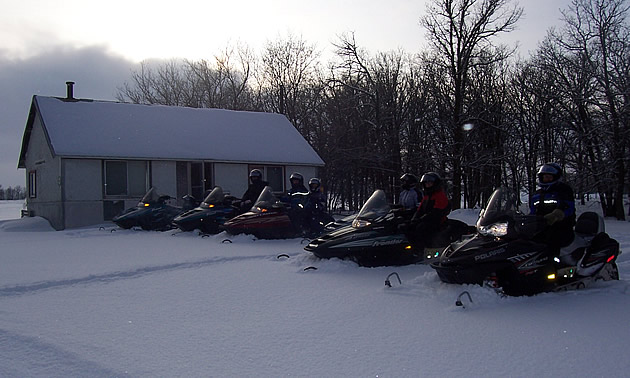 Cypress River is an ideal area to ride with friends and family. Photo courtesy Don Wilcox

Don Wilcox has been snowmobiling for many years, and it was difficult for him to pinpoint a memorable day to share. But while sharing one story, another popped into his head that happened just under 20 years ago.

It’s about a spur-of-the-moment decision to go for an overnight sledding trip—beginning in Holland, Manitoba, and staying the night in Winkler. Wilcox and his wife, Emelody, started out on a Saturday morning and headed south. After a day of riding they stopped for the night at a hotel in Winkler, Manitoba.

The next day they continued to head south and travelled all the way back to the Canada/United States border, then made their way down to a town called Wahalla in North Dakota.

From there they hit the trails in the deep Pembina Valley—trails that were in great condition for riding—providing the couple with a perfect Sunday sledding experience. Wilcox noticed that the wind had picked up, but didn’t think anything of it. Then they started heading up and out of the valley.

“When we came out of the big valley, it was like we hit a snow storm,” he said.

The pair had come out of the Pembina Valley into a whiteout and quickly found themselves going off track.

“All of a sudden we couldn’t see anything,” Wilcox said. “We couldn’t tell whether we were on the trail or not and we eventually ended up in a farmer’s field.”

But this farmer’s field was only the first of many vacant lots that the couple would encounter.

“There were a bunch of vacant lots with nobody home,” said Wilcox. “When we got to the last one, thankfully someone was home. To be honest I was getting a little nervous because it was almost four in the afternoon.”

A farmer was home and he was able to give them directions to a town called Langdon in North Dakota. They had been there before on a previous trip to the United States, and it gave them a ray of hope in the storm. It wasn’t until the two were able to reach Langdon that Wilcox was able to breathe a sigh of relief.

“I was really relieved when we got to Langdon,” he said.

Getting back home would be a snap now, whether it was a snow storm or pitch black.

“From there we were able to follow the highway in the ditch all the way to the border,” said Wilcox. “After we crossed the border we knew where we were going.”

The two didn’t make a stop in Winkler on the way back; they headed straight home and made it there a little later than they had originally wanted to.

That trip down south was a more nerve-racking ride, but it was still just as memorable as all the others.