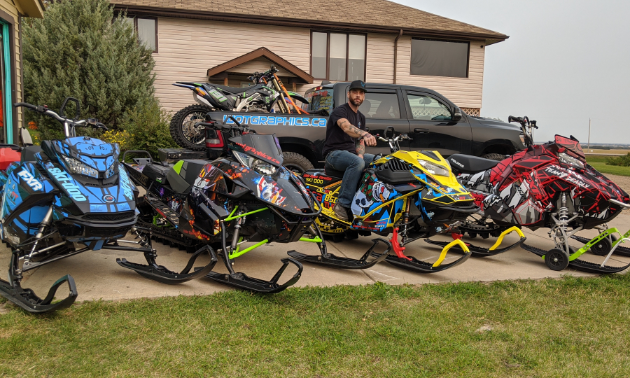 “We specialize in custom one-offs—not your average click-and-pay. I help people see a vision in their head and transform it onto a machine they would live on if they could.” — Chris Thiessen, owner of Wide Open Throttle in Red Deer, Alberta Photo courtesy Wide Open Throttle

“Sledding is a lifestyle. Why not show it off?”

From that insightful thought, Chris Thiessen created Wide Open Throttle, a business that produces custom designs for all kinds of machines in Red Deer, Alberta.

“I wrap all kinds of toys—snowmobiles, dirt bikes, ATVs, side-by-sides, sled trailers, cars—you name it,” said Thiessen. “We specialize in custom one-offs—not your average click-and-pay. I help people see a vision in their head and transform it onto a machine they would live on if they could. From day one, my customers are involved in the design process to ensure they get exactly what they want. Nothing goes to print unless the customer is 100 per cent happy.”

Thiessen wasn’t always a diehard sledhead. For four years, Thiessen worked at an Arctic Cat and Yamaha dealership. During that time, he began installing graphics kits onto bikes, the first being his Yamaha R6. Thanks to some prodding from a coworker, Thiessen expanded his love for motorsports into an obsession with snowmobiles.

“One of the salesmen tried to get me sledding for a couple of seasons and I would never go,” he said. “I didn't think it was for me. I was dead wrong back then. I finally went sledding for the first time and was instantly hooked for life.” 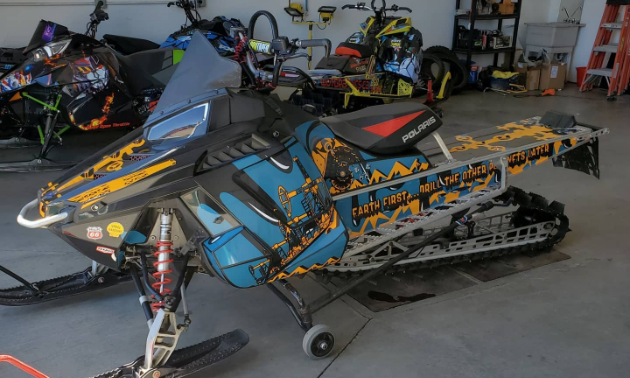 When Thiessen started his company, he did mobile installs with wraps from competitors. After doing that for a time, he decided to buy a printer and make his own. Photo courtesy Wide Open Throttle

As his passion for snowmobiling continued to rise, so did his skills as a smooth sled wrapper. Since he always wanted to work for himself, he took a chance and began his entrepreneurial quest.

“I asked myself, ‘How can I make a living sledding?’ ” Thiessen said. “This was the perfect opportunity to live a dream in more ways than one. I took a huge risk and put everything I had into starting up Wide Open Throttle.” 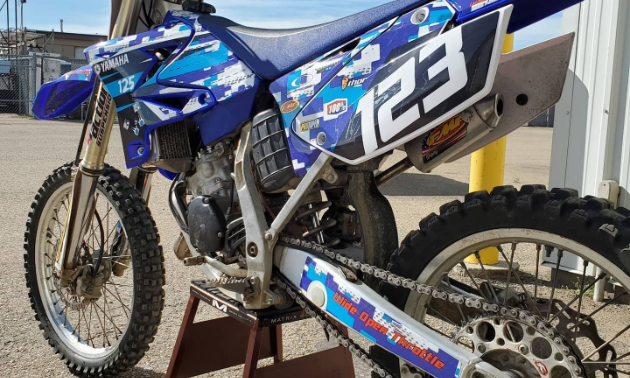 “The best part of my job is the daily smell of two-strokes—sleds, dirt bikes, ATVs, side-by-sides—all of it.” — Chris Thiessen Photo courtesy Wide Open Throttle

When Thiessen started his company, he did mobile installs with wraps from competitors. After doing that for a time, he decided to buy a printer and make his own. A year and a half later, the investment has clearly been worth it.

“My customers become friends during the design process and I end up with new riding crews,” Thiessen said. “Life behind bars is a lifestyle, not a hobby. It’s not just the wraps we sledders are passionate about. It’s everything this sport has to offer. Why ride a stock sled when there is so much you can do to make it your own? From a can, tunnel bag, wrap, turbo—whatever it is—it’s yours and that machine takes you to your paradise.” Wide Open Throttle doesn’t just do wraps. For as little as $400, you can ride one of Wide Open Throttles’ rad-wrapped snowmobiles for an entire weekend of pow-filled adventures. Here are a few of Thiessen’s favourites from his fleet of sleds: 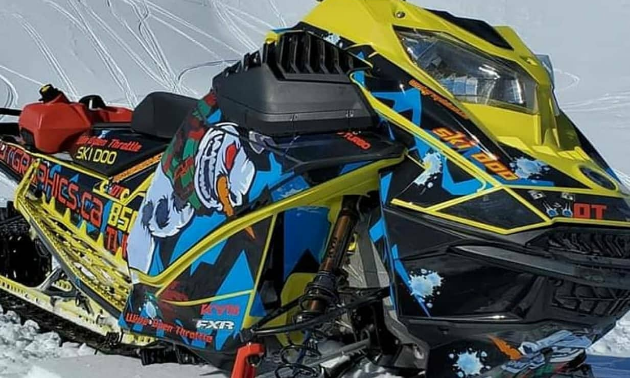 “My 2020 Ski-Doo 850 Turbo is by far my favorite. I call it Abominable.” — Chris Thiessen Photo courtesy Wide Open Throttle

If you see what you like, participate in SnoRiders’ 2020 Best Sled Wrap contest and show your support for Thiessen and Wide Open Throttle. “The support from local dealerships, local riders, SnoRiders, Roland, and customers all across North America has been unreal,” Thiessen said. “I want to say thank you to everyone that has helped make my dream a reality. It's been one helluva ride up to this point and I’m going Wide Open Throttle into the future.” “He did my graphics for my bike. Fast response time. Got it done in a matter of days and will make all the changes you want, even little ones. Great to deal with!” — CJ

“Chris does amazing work. Words can't explain how happy I am with my sled wrap and the service. The wrap was a bit of a task but he killed it. I recommend him to anyone looking for a custom one-off design. Chris, keep killing it, buddy. You're one hell of a guy and your pride in your work shows.” — Michael Blackstock

“Rented me a great snowmobile! Be back next year.” — Keith Murrant 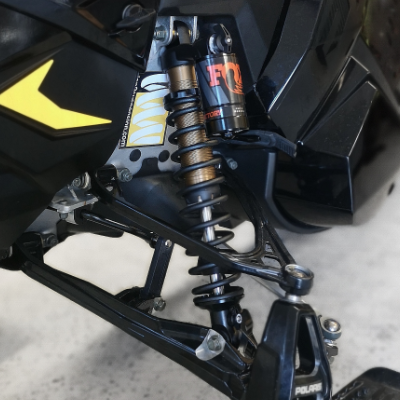 Warren Young, President of the Ridge Riders, highlights the best aspects of sledding in Vermilion, Alberta

Promoted content, Revelstoke, BC No sled, no snow? Revelstoke’s Glacier House has you covered (in powder)

Looking for all inclusive no-fuss riding packages for all classes of riders?